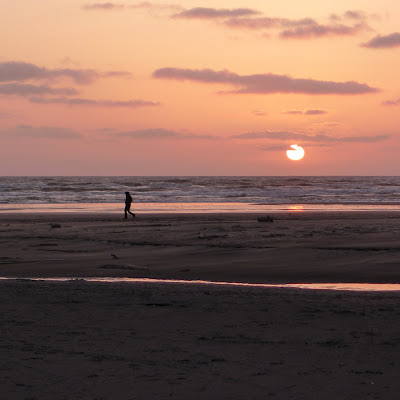 A coastal vacation in the Pacific Northwest can feel like a gamble when it comes to weather, but sometimes you get lucky. When that happens, its the best place to be. During the first week in May, my husband and I spent three days on Washington's Long Beach Peninsula, about a three-hour drive from Tacoma, where we enjoyed sunshine and relative calm in which to walk, ride bikes, and explore by car or foot. We also stayed in an unusual hotel.

The town of Long Beach, like its name implies, stretches out long and narrow, north and south. From the main street, Pacific Avenue, we had only to go a couple of blocks west on Sid Snyder Drive to find our lodgings, a place called "Adrift." Situated in the best of all locations, it stood right where the pavement gave way to the sand, and I could feel all my pressures and stress give way to relaxation.  We arrived on a quiet Monday and the end of the road seemed like the ends of the Earth.

About a half a block away from the hotel parking lot, we could access either the elevated wooden boardwalk or paved trail that extends for miles over the gently undulating and narrow zone of tall beach grass and stunted pines. It's called the Discovery Trail to commemorate history. We walked in the footsteps of Lewis and Clark and members of their Corps of Discovery, who wandered along this same strip of coastline over 200 years earlier. And just beyond the trail roared the mighty Pacific Ocean.


Like the spirits of  those long-dead explorers, deer also moved ghost-like near the hotel one evening. People who did not happen to catch a glimpse of them during their silent passage would never have known they stood so nearby,stopping for a moment, curious and cautious, then moving on. I tried to follow this group of four from a respectful distance, but when I reached the stand of pines toward which I saw them move (as shown in the video below) they had vanished.

Just a short walk down the trail we saw the remains of a gray whale skeleton along with informative historical markers. Lewis and Clark reported seeing gray whales along this coast too, but this one died on the beach about a mile north of where it is now, back in 2000. Nearby stood a whale sculpture and south of there, on another section of the trail, we found a wooden carving of what appeared to be dolphins. The trail features historical markers and sculptures in several places, plus an occasional bench.

The Adrift hotel itself felt as relaxed as its surroundings. Our perfectly clean room, had wi-fi, a smallish flat screen TV, and a comfortable bed. But we had been told by friends not to expect luxury and that advice proved accurate. The name is new but the building has been around for quite a few decades, formerly known as the Edgewater. The current owners remodeled and redecorated with a theme of minimalism, value, and sustainability to appeal to a certain type of guest. I considered myself that type, until I saw through the hype. Please read on. (Hint: When you hear the word sustainability is it true, or just trendy?) 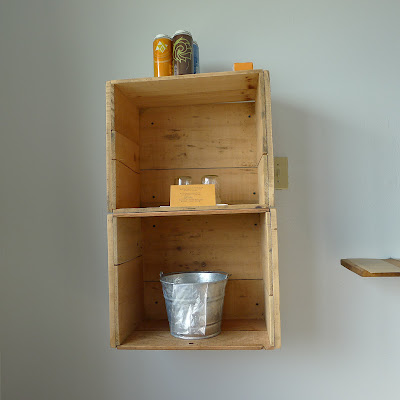 If you have embraced a minimalist lifestyle you'll feel right at home as soon as you step into the lobby where everything is concrete, metal, and wood, much of it recycled, sometimes cleverly so. That's where you will find complimentary coffee, tea, and a dispenser of water with citrus. The rooms do not include coffee makers unless you request one. This unadorned, ultra-basic theme carries over to the individual guest rooms too. So if you don't like the idea of having bare floors, very little color, upturned wooden crates for cupboards, a real bucket for an ice bucket, and pint-sized canning jars for drinking glasses, you might want to book a room somewhere else.


I don't demand much, and a plain room works for me, since I'm not one to hang around in the room anyway while there is so much to do. And my simple requirements of cleanliness and a good mattress were more than met in these basic accommodations. But this room lacked some simple niceties, such as a bedside lamp.(See caption above). You had to get out of bed to turn the overhead light off or on, which was rather irritating. Instead of a blanket and bedspread, it had one comforter covered in plain white cotton and that was much, much too warm for both of us. But we had no options. It was that or just a sheet, so we had to suffer through being too hot.

In spite of the earth friendly hype, don't assume that this is green or sustainable construction, because it is not. It is still the same old  building, now incorporating recycled materials and a different style. But the presence of those materials seemed more for show than for a good reason.

I was surprised that removal of the old towel racks from the bathroom walls, to put up the wooden crate shown below, did not include filling the holes from the first installment. Since I could see the clean, unfilled holes exactly where the original rack had been, I assume the wall was never even repainted. Also, the raw wood trim around the sink made no sense. With no finish whatsoever, it will soon be water stained and ugly and could eventually rot after frequent exposure to water. It would also be difficult, if not impossible, to clean and sanitize effectively. One of the environmentally responsible wood finishes now available could have made it so much nicer. 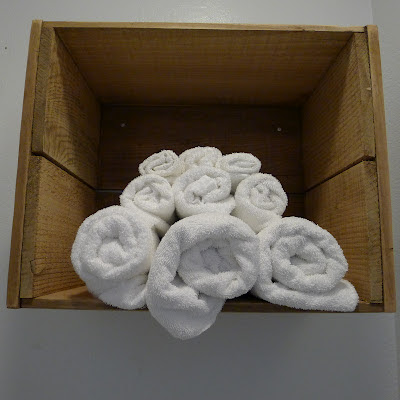 These so-called "sustainable" affectations seem to appeal to those who, for whatever reason, equate sustainability with that which is primitive, unfinished, and crudely built. But those ideas are just plain silly. I've researched and written articles about sustainable construction and interiors, and interviewed builders, and I know what that word means in the housing industry. (For information on sustainable building and remodeling, please click on the links below.)

Believe me, fine finishing and detailed craftsmanship in both new construction and remodels, plus tasteful decorating, are the norm, not the exception. The redesign of this hotel did involve recycling, which is good, but I've seen recycled materials used in far more artful ways. 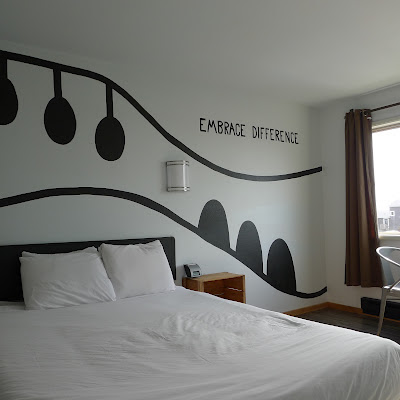 Although the hotel's website shows framed pictures on the walls of other rooms, we had only one aspect of decoration that might be called "art," and that was an over sized image  of something, accompanied by the words "EMBRACE DIFFERENCE." Take a look for yourself in the photo above. Those oval shapes hanging down might have been fruit on a vine, but my imagination turned them into all kinds of other things. The whole thing annoyed me. Okay, I thought, I can, and do, embrace difference, but this is not attractive. I would have preferred a nice watercolor of the beach, even if it didn't represent a politically correct attitude. And those canning jar drinking glasses? Unless they are truly recycled (as opposed to being purchased new in quantity ) they are no more "sustainable" than conventional glassware, but serve only to add that to the recycled look.
I had no problem with the use of theoretically recycled jars as part of the lighting in the the hotel's Scapece Restaurant, but most features of the decor seemed more shoddy than chic. I saw no aesthetic appeal in the collection of boards nailed to the wall either ( as shown above) or the presence of a steel "I" beam as a focal point in the restaurant. But I will say that the atmosphere was fun, the service excellent, and those almonds sauteed in olive oil... oh my!


The restaurant's west-facing perch on the fourth floor made a romantic setting from which to view the sunset. Happy customers and a courteous wait staff gave it a good vibe. Our visit occurred just a few days before the restaurant officially opened, so we could only order from the bar menu. That suited us fine, since we had already eaten dinner, but guests sitting at the next table had the pizza and it looked delicious.

Would I stay at this hotel again? Yes I would, because of the many positive aspects. With its great location, free use of the hotel's bicycles, movies, and games, plus the fact that dogs are welcome on the first two floors, it has much to recommend. But I will remain unimpressed by the hype about sustainability. I don't think a few more creature comforts, like a bedside lamp and a real drinking glass would endanger the planet.

However, in the end, none of those material things mattered as much as the experience of the beach and the nice time spent with my husband. That included two early morning bike rides over the dunes with nothing to break the silence but the sound of our wheels on the trail and the songs of birds.

Now I'll leave you with a video I shot one evening, that captures the essence of sunset at the shore.

Very interesting to see this hotel. I like the idea, specially knowing some people might turn it down, they still go for recycling which I'm very interested in. This the only place I've seen like it and really would rather give them my money that those tacky huge wasteful room some may prefer.

fantastic post and Thanks for sharing this info. It's very helpful.
b&b in jaipur