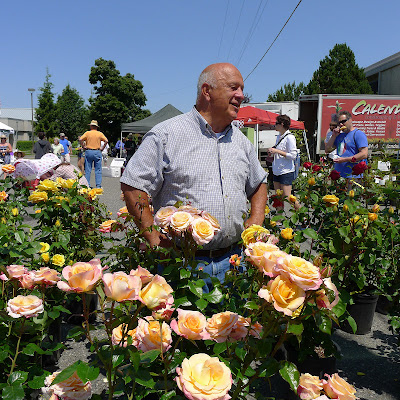 At the Proctor Farmers Market in Tacoma last Saturday, I found Frank Gatto in his usual situation—surrounded by roses. The massive display of healthy, blooming potted plants from his Gig Harbor nursery, Raft Island Roses, draws its own crowd in a marketplace full of many competing sensory delights. He surrounds himself with roses at home too, with about 300 in his own yard.

While many of us find our garden roses in a slump in mid-summer, one look at the plants from Raft Island Roses proves this man knows how to keep his favorite flowers happy. Gatto is well-known and highly respected among rosarians all over the Pacific Northwest and beyond, often called to be a guest speaker or consultant. At the nursery, he and his son Michael have created 250 crosses from the many varieties they sell.

For my own sake, and that of readers of Good Life Northwest, I asked Gatto for some pointers. He shared the seven essentials for growing healthy roses. In spite of constant threats from insects and disease, if you follow these tips carefully, you too can enjoy success with roses. And it is possible to do so without chemical sprays that are hard on humans and the environment.

1.) SELECTION — "It all starts with selection," Gatto says. "Pick disease-resistant varieties, and get some expert advice. Don’t choose from photos in catalogs, and avoid packaged roses. The roots are cut short, crammed in, and often broken.”

2.) WATER — "Five gallons per week per rose" is Gatto's advice. "Water deeply," he stresses. "When you pour on five gallons and it soaks down deep, your roses grow roots to reach that water, and they can survive even if you're gone a few days and can't water them." ﻿

Many people think that the decline in blooming during the heat of the summer is
just a natural circumstance with roses, but that is not true. With proper watering they can stay lovely and productive throughout the season, as proven by those he offers for sale. "If you water only near the surface," Gatto says, "they develop shallow roots and can dry out quickly and then they go dormant."

Deep watering starts with planting. I listened to him giving advice to some buyers at the market. "First water the rose in the pot. Then dig the hole and water the hole. Plant the rose and water again," he told them.

Note: Be sure your roses have excellent drainage! "Roses love water," Gatto says, "but they hate wet feet."

3.) SUN — "Roses need at least five hours of sun daily when actively growing. Six or seven is better, and preferably morning sun, because it dries off the dew," he says. "It takes about eight hours for blackspot spores—in contact with stagnant water—to cause disease, so keep the leaves as dry as possible, and clean up dead leaves on the ground.”

4.) SPACING — Gatto considers spacing a “critical choice” for healthy roses. He says a distance of five feet is the minimum. Planting bushes six or seven feet apart is optimal. “Don’t put in a deep rose garden. A single row, where you can walk around them, is by far the easiest to water and maintain and gives the best air circulation, making it harder for diseases to spread. It isn’t uncommon to see roses planted 18 inches apart, and that guarantees disease.”

5.) SOIL — For planting, Gatto mixes 50 percent native soil and 50 percent organic compost or good potting soil and adds a cup each of bone meal and soil sweetener per bush. He also gives established plants a cup of lime in March, for optimal soil pH, which allows plants to make better use of food.


6.) PROPER FEEDING — Gatto advises giving roses small but frequent meals, as opposed to large amounts of fertilizer less often. He uses a balanced granular fertilizer with an N-P-K number no higher than 20 (such as 15-15-15), along with a blend of organic meals including alfalfa, cotton seed, fish, blood and kelp. "I give each one a handful (about a half a cup) every three weeks." Water thoroughly after feeding.


Frank and Michael Gatto both offer customers plenty of personal attention and are happy to answer any questions. One or the other can be found at several Puget Sound area farmers' markets:

Whether you shop at the market or nursery, prepare to succumb to temptation when you find yourself, like Frank Gatto, surrounded by roses. You would be smart to listen to all his advice, but only you will know when you meet the rose with which you'll fall in love. Gatto smiled and shook his head as he told me that no matter how many questions he answers or suggestions he makes, it comes down to this: "The heart rules."

Thanks, Candace, for the wonderful pictures AND text about the "rose garden" at the Proctor Farmers Market in Tacoma. Even though you lamented not being able to 'pass on' the scent of the roses you still presented a great photographic journal of Frank's beautiful roses. I bought two of the plants last Saturday and now have even a better idea of how they should be planted after having read your article. Thanks for helping me 'smell the roses'! Bill

Thanks for writing, Bill. I've never seen any roses healthier than the ones Frank and Michael sell, and that's because they give theirs such great care at the nursery. Raft Island rocks!