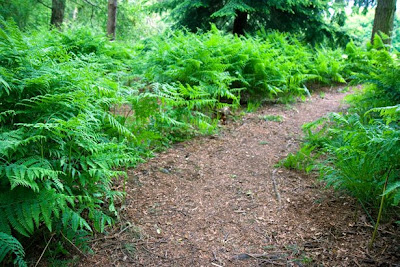 First I felt the tension in her leash. Running over unfamiliar ground, I’d been watching the path, not looking ahead, not expecting this sudden stop. The run was meant as a reward for her, after behaving so well while walking through the rose gardens in Tacoma‘s Point Defiance Park, indulging her humans. Sometimes it’s tough to be a greyhound, born to run. But now she stood rigid, dark eyes focused, long neck like one huge muscle, ears up, sculpted thighs poised to spring. She looked very still, but up close you could see the slight trembling. Controlled tension, like electric current, ran up the live wire of leash to my hand.

“Bella. What is it?” I whispered. It seemed like a time for whispering. It was almost twilight. No one was around. We’d left the people, lawns and gardens, and my husband, all behind. Letting Bella call the shots for once, I’d run with her up the hill to the old stone ruins of the “bear grotto” left over from the original, less humane zoo of long ago. I remembered it from my childhood, a darkish place with man-made caves of natural stone, where the sight of bears confined in it, behind their prison bars, evoked both fear and pity. I wondered if somehow their smell remained.

Then, in a cluster of bushes and small trees, I saw the deer, the very young male, his first small stubs of fuzzy antlers sprouting from his head. He was close, maybe ten yards away. He stared for a minute, then dared to move again in slow, careful steps, continuing uphill. I’d signaled my husband, who had now caught up with us, and together we watched as our greyhound Bella became the essence of her instincts. She’d spotted another, this time a young doe. It too, stopped and stared then seemed to tip-toe away. We waited for them to gain some distance from us, not saying a word.

Beyond, uphill and to the south, cars drove by, exiting the park. Down below us, near the pond, children ran and shouted. A couple walked across the grass only fifty yards away, with two big dogs, the kind who would have started a commotion of barking if they’d seen what we’d seen. But the three of us stood paralyzed and silent. Greyhounds can bark, but rarely do, and at times almost become the wolf ancestors they are less far removed from than their fellow dogs. She was nothing but power and concentration, beautiful in the purity of her intent, and her sudden incredible strength made me hold the taught leash as tightly as I could.

Then Bella snorted and shivered. Frustration surged through her. We’d let the deer pass and, having her under control, we decided to continued on our path, trespassers that we were, in their feeding grounds. We hadn’t meant to disturb them and it seemed they were heading away, so I relaxed the leash a bit and began to walk forward. Bella nearly yanked me off my feet.

She’d seen the big buck. On the other side of some vegetation, there he was, standing his ground. In the shadows of coming twilight I hadn’t noticed him, the way his coat had taken on a drabness as all colors became muted. It was a showdown now. Still Bella did not bark, but her whole body had shifted into a forward-slanting pose. It took all my strength to hold her. Her nostrils flared.

So did the buck’s. He stood there proudly, cautious but unhurried, evaluating the situation. He had seen plenty of humans, but what was this strange, thin, powerful dog, who stared at him in silence? I doubt he had ever faced a greyhound before. We stood close enough to see the look in his eyes, to feel a strange and primitive connection in that unyielding stare. Minutes passed. His expression said to us, “Fellow Creatures, hear my thoughts. Night is coming. Leave this place. We claim it now.” And with that he leisurely turned his elegant head, raised first a front leg then a back leg in slow motion, with deliberately exaggerated steps, and left us behind.

Bella’s eyes had never moved. She watched him depart to join the two other living shapes as they disappeared. Then we too turned to go. She looked over her shoulder and snorted again, but obeyed us. There were new distractions, children, ducks on the pond. She pranced gracefully across the grass, back to the world of humans and we all got into the car.

We decided to take the Five Mile Drive instead of the quick exit. The road winds through the forest, occasionally swinging out near the bluffs where still a few people remained, who had stopped their cars at these viewpoints. We stopped too, looking north up the west side of Vashon Island, where I am from, a world of water and curving points of land, one fading after another as they receded in the distance. The water was illuminated in the remaining light.

We continued on. From another turnout you can see the two bridges across the Narrows, back in civilization, but Bella didn’t care. Her instincts were still keen on nature. And she was rewarded. In the last two miles of the drive we saw, separately, six raccoons along the road. Each time we pulled over and they approached us with curiosity, fearless, walking around us, or between the wheels. Bella dashed from one side of the car to the other, sniffing so hard out the crack of the window it made us laugh. What a night for a dog!

Soon we had left the park completely, heading home through the west end neighborhoods, where lights were coming on and cars pulled into driveways. It was nearly dark. I was glad to be home again, in my own domain, but I thought about how incredibly lucky I am to live here. It’s a five minute drive to the city’s treasured Point Defiance Park, but it’s still world’s away, if you let it be. Oh, I know. In the main areas you find some traffic, picnic tables full of noisy people, impromptu soccer games, crying babies, barking dogs. But if you are aware, if you are silent and still, in the quiet evening you may see a glimpse of another, parallel world existing alongside ours. Remember then, we are all here together, Fellow Creatures. We are only a part of the population on this Earth. Remember to respect all your neighbors and be grateful that here in Tacoma, a bit of the wild still exists.
Posted by Candace Brown at 11:01 AM 2 comments:

Email ThisBlogThis!Share to TwitterShare to FacebookShare to Pinterest
Labels: FeedTacoma.com 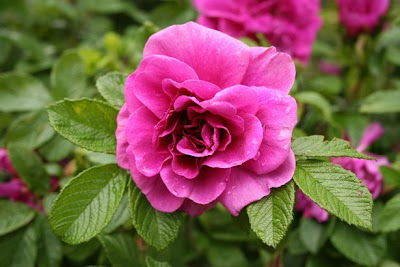 I turned to see who'd asked the question. Some guy with a smirk on his face stood behind me, eves-dropping on my street corner conversation with a friend. We were waiting in a herd of pedestrians to cross a busy downtown intersection in another city. Was he actually curious or just being rude?

"You say you love living in Tacoma" he went on. "So, what's so great about it? Is there something I should know?" He looked at me like I was a five-year-old insisting that Santa Claus IS real. I stared at him for a moment. He'd spent way too much time and money on himself, trying to look cool. It hadn't worked. I touched this stranger lightly on the arm, and spoke with compassion.

"Yes. There is much you should know, Grasshopper, but you are not yet ready. Please go back to your coffee shop and seek wisdom." Then I left him there as the light changed. I didn't want to share my city with him anyway.

So what IS so great about Tacoma? Where can I begin? I can't help thinking, first of all, of the natural beauty. Yesterday afternoon as I drove home, dropping down to the waterfront on Schuster Parkway, the sun shone gloriously and there was just the perfect breeze for sailing. The expanse of blue water from Commencement Bay to Vashon Island held dozens of sailboats. I wished I was on one. In my mind I could feel the lines in my hands and hear the snap of the sails, memories of island living. Tacoma is surrounded by beauty, with mountains, forest, and sea on every side.

Then there is the sense of history. I love the vintage structures downtown, the Union Station, the clock tower, the brick warehouses with the faded paint of advertising still showing on their sides. I love the aging apartment buildings with elegant-sounding names, and lovely old houses that still grace the city, stately and serene among maples and evergreens, on lots where flowering shrubs themselves, have reached the size of trees.

When I think about why I love Tacoma many little things come to mind:
What's so great about Tacoma? It's a combination of the place itself and the people in it. If you live here, take pride. If you don't. . . well, never mind. Have your doubts. We'll keep it to ourselves.