Breath of Life: Marine Air in the Morning 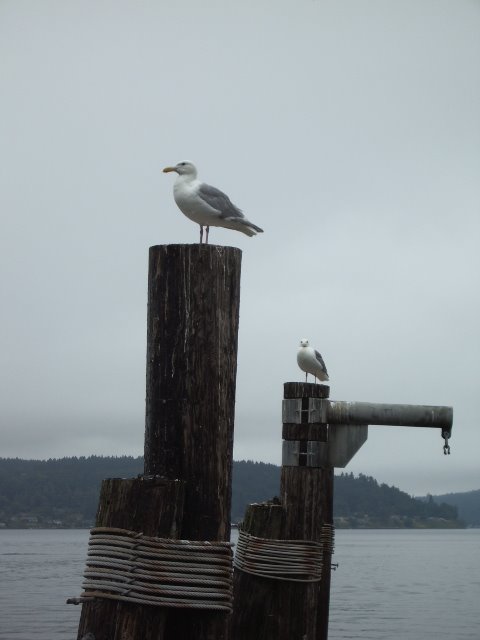 Waking early from a dream on this summer morning, I sensed the difference at once. Ah, yes! The “marine air” had arrived in Tacoma overnight, as promised, and feeling like a traitor to the idea that summer should be all sunshine and heat, I welcomed it. The atmosphere carried to me, in its body of oxygen and moisture on the verge of mist, the fresh smell of the sea that I had grown up with. I stumbled across the room, raised the shade, and slung the window open wide, to breathe deeply and contemplate the day. My list of chores would have to wait. The water called to me. 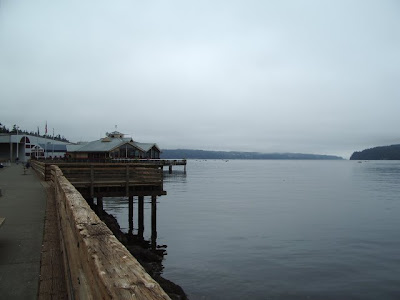 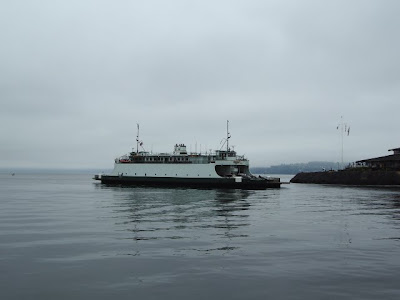 This kind of gray morning on Puget Sound holds a kind of intimacy for the few of us at the Point Defiance boathouse. A kind of private serenity rests over all, because of marine air.  It floats on the cold surface of the water. It spreads an invisible blanket of peace from shore to wooded shore, obscuring the most distant points of land. Birds circle through it.

The metal parts connecting sections of the float, creak as it gently bobs. An outboard motor starts up, then begins to fade in the distance.The ferry Rhododendron glides toward the dock. North of Gig Harbor, an area of fog slowly drifts across to the east, dispersing like smoke. I feel a hint of mist on my skin and know the wild, free curls in my hair are getting wilder.

Between the Point and Vashon Island, fishermen traverse the brine in their boats. I imagine their eyes gazing out from the weathered faces. In their silence is reverence. The seagull’s cry and the sound of water slapping against the hull feel like hymns to them. We all breathe and feed on marine air, nourishment for a new day, every cell filled and fueled with fresh energy. Each of us seeks something. They troll for hidden fish and I will go home to sit at my keyboard and troll for hidden words, in the deep waters of my mind. 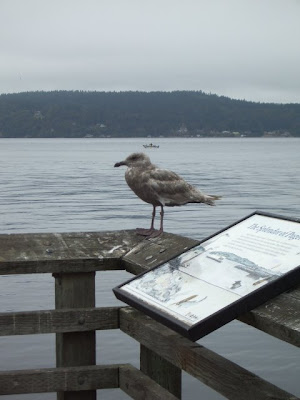 The forgotten coffee sits cold in my mug. The sky is brighter, the air less moist, promising another warm summer day, the kind we all claim to covet. From minute to minute, as I type and look out the window, I can see the colors in my yard intensify, the sun starting to burn through. A slight breeze means the last touch of mist will soon be gone. Cars drive by, busy people on their way to somewhere.

I have a million things I should be doing and it’s nearly noon. I don’t care. I took the time to honor who I am, and where I come from, by going down to the water’s edge where I am most at home. Now I’ll spend the day in gratitude for all the good things in my life, including it’s contrasts. The secret to life is to fully experience and appreciate it all, and then to have some solitude in which to ponder it. How glad I am that I indulged in the pleasures of a morning of marine air. 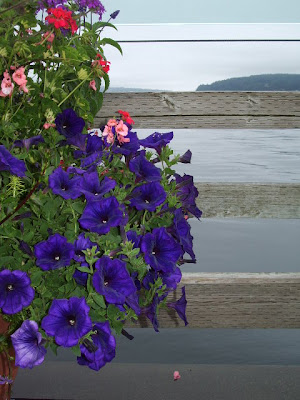 Posted by Candace Brown at 12:27 PM No comments:

Adventure on Adventuress: A Tale of Tall Ships 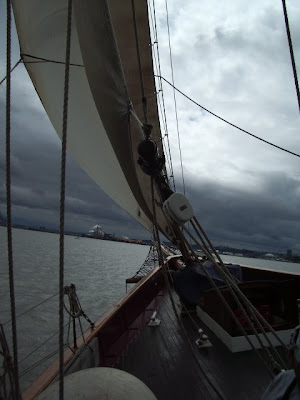 I woke on Sunday morning still feeling the thrill of the dream. The adrenaline rush of speed and power, wind whipping my hair, the sloping deck, the hiss of hull slicing water, still held me hostage. It felt like the first wild waves of some crazy love affair. I wanted more. I’d never before dreamed about sailing.

It had been years since I’d sailed, but as soon as I learned of the opportunity to do so again, in conjunction with Tall Ships Tacoma, some compulsion seized me and I knew I had to sign up. I’d received an email from Rachael Costner, of Sands Costner and Associates. As Advertising and Marketing Manager for Tall Ships Tacoma, and as the director of Womens' Resource, she was offering group reservations to sail on the historic schooner Adventuress. I didn't hesitate a minute! Within the day it was sold out. Last Saturday morning my husband and I were the first ones in line at the muster station on Tacoma’s waterfront.

The long-awaited day began atypically for the Northwest, a combination of warmth, gray clouds, high humidity, and calm. My imagination called for blue skies and a lively breeze. Who wanted to motor around Commencement Bay in a gorgeous ship built to fly on the wind? But shortly after we boarded and pulled away from the dock the drama began. Slowly at first, then faster, a breath of wind grew into more. Rain clouds threatened with a few spitting drops. On all sides, dark water danced.

Next we were put to work, because sailing on this ship is a “hands-on” deal. If the ninety-five-year-old Adventuress could talk it would be quite a tale, but now she’s owned by Sound Experience, a non-profit organization existing to give young people and adults a chance to learn about, and come to truly appreciate, the unique marine environment of Puget Sound. It’s also a chance for them to learn about, and come to love, sailing. We were all part of the crew that day. The first thing we did was help raise the sails. 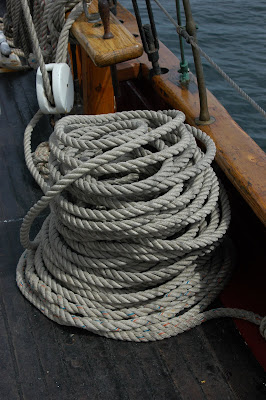 Ships have voices and Adventuress first spoke to me when I heard the sound of the lines being pulled, that satisfying, rhythmic music of rigging and human effort. In the instant of unfurling, the canvas caught wind. Sails trembled, snapped, and swelled as they began to fill. Then along with the creaking of lines and wood, I heard a deep rumble. Thunder? The dark sky suggested the possibility, but no. The rumbling voice now clearly came from the sails, a gutsy statement of strength and confidence. Then it was done; lines taut and canvas arching, a sudden quiet prevailed. At that moment, with that first eager surge of power, that full revelation of beauty and grace, I felt myself become part of this living force. Together, we flew!

The story of Adventuress began in 1913, a saga that commenced with a voyage that took her through the Straits of Magellan then all the way north to the Arctic. She spent thirty-five years working in very hazardous conditions for the San Francisco Bar Pilots Association, also for the Coast Guard during World War II, was dismasted by a storm, nearly destroyed by fire, and rebuilt because those who knew her so well loved her so much. It’s easy to understand why. After only about three hours on board, I miss her.

Luckily, it will be possible for me to sail on Adventurous again, and so can anyone reading this. A $50 annual membership in Sound Experience buys free admission to more than a dozen three-hour sails in Puget Sound per year, along with many other benefits. But how do you define “benefits”? Does it mean a newsletter and invitations? To me the benefits will manifest in deeper, richer ways. Adventuress implies adventure. One definition of that word is the encountering of risks. I will risk the routines of my life and comfort zones to shake up the routines of my mind, rattle my heart and soul as the rigging rattles when we come about. Another definition of adventure is a remarkable experience. It was all of that, and so much more, the stuff of dreams. 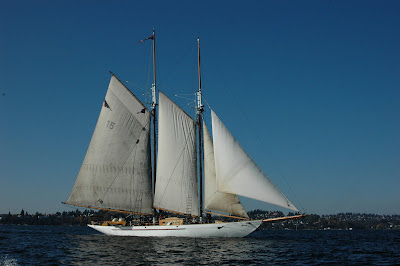