Although I have always been aware of the musical Carousel, I had never seen a single production of it until last week, at The 5th Avenue Theatre in Seattle, where it runs through March 1, 2015. Neither have I seen the 1956 film by the same name. I knew nothing of the plot and took my seat with an open mind. Carousel initially appeared on Broadway in 1945 as the second collaboration between composer Richard Rodgers and lyricist Oscar Hammerstein, their first having been Oklahoma. Although I try to avoid reading or hearing the opinions of others before I judge for myself, it is interesting that two people who spoke to me at different times on the evening I attended made equally true but opposite comments, and I ended up agreeing with both of them.

The first person told me, just as I arrived, “This is such a beautiful musical. You’re going to love it.” Yes, it is truly beautiful. All aspects under the control of the theater were offered in glorious style and abundance—great singing, dancing, acting, etc. The orchestra, 21 pieces this time, performed Richard Rodger’s unforgettable compositions so beautifully I hated for them to end.

A couple of highlights for me were Billy Bigelow (Brandon O’Neill) singing his Soliloquy and Nettie Fowler (Anne Allgood) singing You’ll Never Walk Alone. Both are amazing. I especially enjoyed Billie Wildrick's character of Carrie Pipperidge—funny, vivacious, and delightful with a voice as fresh and pretty as a bird on a spring morning and full of warmth. Those in other supporting roles also gave outstanding performances. Best of all, this is an exclusively Seattle-grown production, drawing on the immense amount of local theatrical talent to create something other cities should envy.

So, yes, it was beautiful, but there was another side. The second person who spoke to me that evening, during the intermission, offered a warning. In essence, he said, “The second half gets much darker. This is actually a very dark story.” He also spoke the truth. This is no fairy tale, and it can make you sad or cynical, depending on your personality, without offering what I would consider an adequate reward of satisfaction to balance that. It deals with domestic violence and suicide. Its publicity speaks of “redemption,” but true redemption seemed incomplete or impossible. Of course this is the fault of the material, not the production. Set in the late 1880s, when women were still often seen as chattel, the musical looks at domestic violence in a noncommittal way, leaving me to wonder what Rodgers and Hammerstein actually thought about that issue. By the time the film adaptation came out in 1956, and even a decade after that, attitudes had not changed much. What are they now?


In Carousel, the female protagonist, a young woman named Julie Jordan (Laura Griffith) is a rather serious loner, working in a textile mill in a small coastal New England town in the late 1880s. She meets a handsome but tormented “bad boy” carnival barker named Billy Bigelow (Brandon O’Neill), and it is lust at first sight. Julie risks everything to be with this obviously flawed roustabout she just met (which seems unlikely in that time and place) and they do fall in love, but neither will admit their feelings to the other. They scoff at marriage, but get married. Then they continue to make matters worse.

When I see musicals, I try to remind myself that they are mostly about the music, singing, and dancing. Sometimes I can enjoy all those things immensely and still not feel sympathetic toward certain characters, even characters I am expected to like, and this has nothing to do with how well the parts are acted.
The character Julie might seem strong and inspiring to some, the epitome of the loving and loyal wife, who would never leave the man who treats her badly. I saw her as good, kind, loving, and loyal, but also weak, lacking self-respect, and enabling. As for Billy, he was not devoid of caring, tenderness, or a sense of right and wrong, but he was still abusive and self-centered. After reacting to everything immaturely, he ultimately takes the easy way out.

As happens in many families, bad decisions result in consequences that impact the next generation, in this case, the daughter they would never raise together. In spite of great acting and singing on the part of Griffith and O’Neill, this leading couple we would hope to cheer, identify with, and embrace, offered little for me to admire.

Some things just plain annoyed me, even while I would call this a dazzling production and a “must see.” If that seems contradictory, let me stress that it was a visual and aural delight. The warm, earthy colors of the costumes glowed against a backdrop of cleverly conceived, minimalistic scenery that, for the most part, didn’t take up room on the stage, allowing plenty of space for the cast and the members of Spectrum Dance Theatre who took part in this co-production. Martin Christoffel’s set designs included the silhouettes of highly stylized sailboats suggesting a harbor, and stacked wooden crates on the shoreline of the 19th century New England town where the story takes place. The carousel itself was also more suggested than shown, although a rotating circle in the stage floor helped create the illusion. The music seemed perfectly balanced and the volume at the right level. I could hear and understand all the lyrics and appreciated special effects, such as sounds typical of the waterfront, adding realism to the abstractions. I loved the lighting too.

Carousel is a story full of beauty, wonderful music, poignancy, laughter, yearnings, romances (although few I would call psychologically healthy), plus illusions, emotional dysfunction, and plenty of regrets. Sounds more like real life than escapism, doesn't it? The show’s reminder that we all experience regrets and rarely get second chances moved me more than anything else. This story included little evidence of character development and, probably unintentionally, posed harsh questions. When are people truly victims of circumstance, and when are they victims of themselves and their own bad choices? Is there virtue, (even an expression of “love”) in accepting bad behavior because you think the perpetrator can’t help themselves? Or does that just make you a fool? Should the notion of loyalty include tolerance of abuse? Not in my mind. I don’t care much for excuses.


Although I found so much to enjoy and appreciate in this production of a classical musical, most especially the music itself, I kept wondering, “What were Rodgers and Hammerstein really thinking?” When Julie sang “What’s the Use of Wonderin’” (all about her unconditional love for a guy who acts like a jerk), I kept hearing strains of Tammy Wynette’s “Stand by Your Man,” an equally gag-worthy song that was released in 1968, a year that I could swear was only yesterday. Naturally, it became a huge hit.

I wasn’t even born when the Broadway musical Carousel made its debut. Later, when the film adaptation made the rounds, I might have been an aspiring writer, but one using a crayon instead of a pen and surrounded by dolls and teddy bears who agreed with all of my opinions. Those were the good old days. I'm sure many people disagree with me now. If I had been an adult reviewer in that era when so many of us were unconscious of our unconsciousness, I wonder if my own views would have differed. As beautiful as it is, the main value in Carousel lies in the fact that it might make us look at relationships and see how far we have come, (if we have truly come far at all). I fear way too many people have a warped idea of romance that celebrates martyrdom. They still get weepy over Tammy’s 1968 lyrics:

“You’ll have bad times, and he’ll have good times, doing things that you don’t understand. But if you love him, you’ll forgive him...”

Would you? I suggest you go see it and then ask yourself that question. We all take away something different, and remember, both people who gave me their opinions were correct; it is both beautiful and dark, and also well worth seeing if for no other reason than to test your own cringe response.

Please visit and "like" Good Life Northwest on Facebook.
Posted by Candace Brown at 12:55 PM No comments: 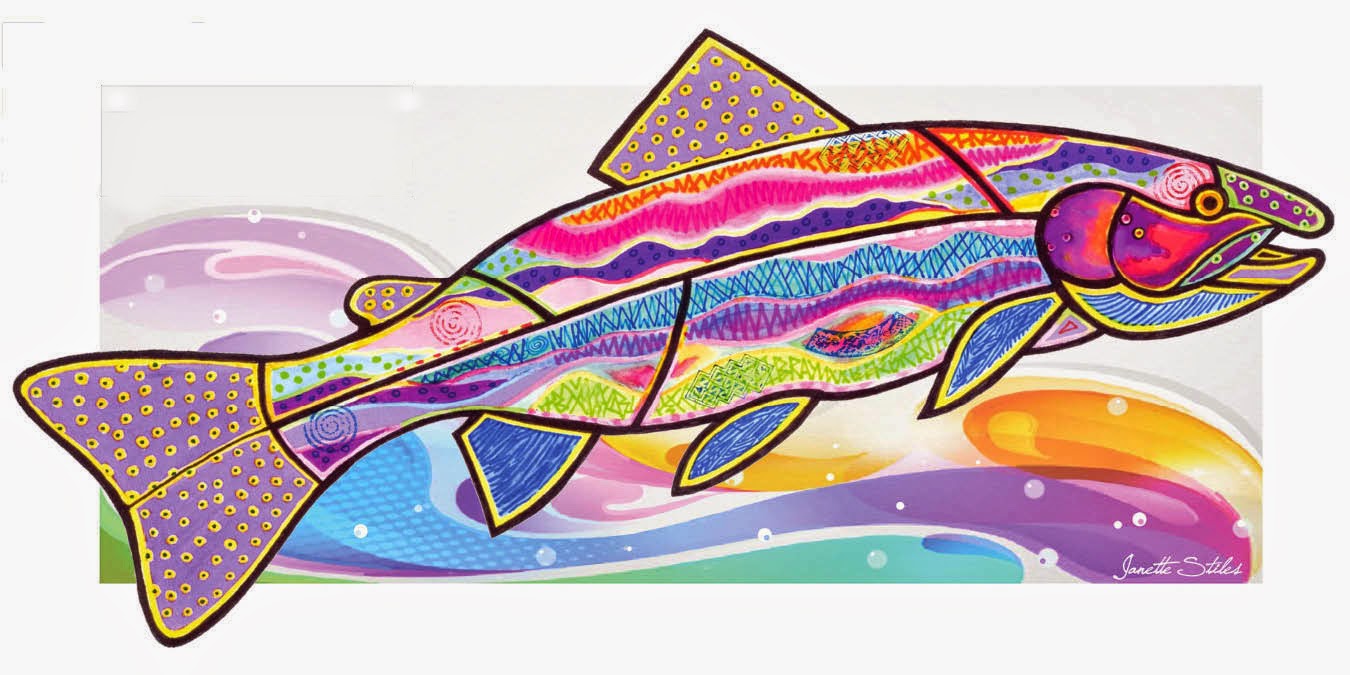 As I write this, the rain clouds have parted, at least temporarily, and I'm dreaming of the summer that will eventually come and the 2015 Proctor Arts Fest, held on the first Saturday of August each year, in Tacoma's Proctor Business District. In 2015, the date will be Aug. 1.

The colorful salmon image above, created by artist Janet Stiles, was last year's winner in the annual poster contest to promote this popular event. Maybe this time next year, I'll be writing another blog post showing YOUR design. All artists are eligible, not just those in Tacoma, although the policy now is that previous winners may not enter again.

Being featured on Good Life Northwest would only be a minor bit of glory compared with having your image spread around on billboards, posters, T-shirts, and other possible media. Imagine the thrill of winning a $500 purchase award and bringing widespread attention to your talents.

For complete information on this contest, please click here. Entries must be submitted by April 15, 2015, so get busy creating your own unique design that reflects the spirit of a summer arts festival. (My advice? think SUN! We need some.) Good luck.

Posted by Candace Brown at 11:37 AM No comments: