Autumn Storms and Secret Places in the Heart 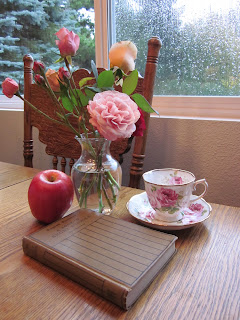 The wind attacked the house in gusts last night, here in Tacoma. Tree branches scratched against the outside wall in their helpless frenzy and rain slapped at the window. Those gentle, golden days of autumn, when I planted pots of chrysanthemums to sit on the front porch and watched for the first turning leaves, are gone. The "season of mists and mellow fruitfulness" described in the famous poem "To Autumn" by John Keats, now lies tucked away in the secret place where I store my memories like so many Johnathon apples kept in a cellar for winter days.
But I still love autumn. Maybe because of my family's 130 years in the Puget Sound area, I find a pleasure in this weather I hesitate to admit to among those who live to complain. Only a native would understand. A sense of the cozy nest wraps around me as I sit and write, grateful that freelancing means working from home.
Now is the season of knitting with woolen yarn, a steaming kettle of soup on the stove, and a still life on my 1910 farm table composed of a book I've waited to read, a cup of tea, and the last of the garden's roses, rescued from the storm just in time.
Spring, so young and pretty, charms everyone. In summer the year reaches adulthood; plants bear fruit, young animals grow, fledglings leave the nest. Fall speaks to me of the poignancy of life. The maturing year compensates for the loss of its youth with a richness and depth of meaning.  Through its ripening colors, the way the sun hangs nearer the horizon, and the cooler nights, it is the beginning of a goodbye.

In this "season of mists" some blur my vision and fill me with a mellow sadness. I think of my father, who would have been 97 this week if he had not died during the spring. I've written about him in earlier posts like one called "Raking in the Memories." As a decoration for his 90th birthday party, seven years ago, I bought a Christmas cactus covered with blooms in terracotta orange. Today I noticed its especially heavy crop of buds, some open already. When my father's birthday arrives in a few days, the cactus will be in full bloom, right on time. How can nature be so wise?
Embrace the autumn storms with gratitude. They teach us what to be grateful for: shelter, safety, food, family, and the harvest of a life well-lived, which is respect, and most of all, love. 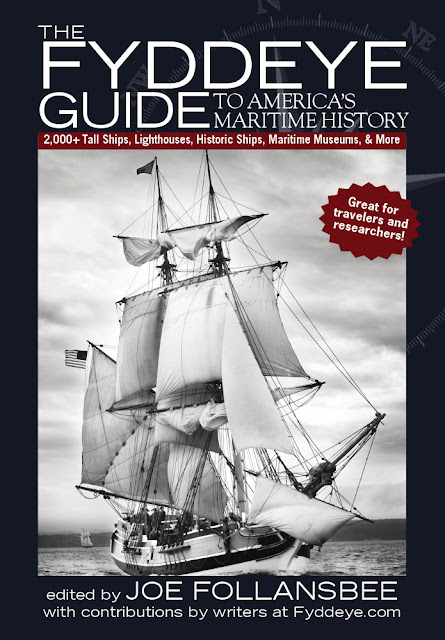 One day in 1999, Joe Follansbee stepped aboard the decaying, three-masted 1897 schooner Wawona and fell in love, too late. Time was already running out for the old ship, but Follansbee, a Seattle journalist and author, joined the effort to save Wawona. He put his substantial writing talents to work in the attempt to convince people that this important piece of Northwest maritime history should be preserved.
Follansbee wrote a fascinating book, Shipbuilders, Sea Captains, and Fishermen: The Story of the Schooner Wawona, plus a number of articles. But if you have never seen Wawona, you never will. In spite of the efforts of many people, this piece of history was demolished.
The sad fate of Wawona affected Follansbee deeply and caused him to adjust the rudder on his writing career. Before discovering his fascination with the doomed schooner, he probably never expected to write even one book on maritime history, and now, in addition to the story of Wawona, he has edited and published a second book: "The Fyddeye Guide to America's Maritime History- 2000 + Tall Ships, Lighthouses, Historic Ships, Maritime Museums, & More."
One motivation Follansbee cites in the preface, is the fact that he became "aware of the fragility of our maritime past." That was also one of the reasons he created his website called Fyddeye, an online source of information about all things related to America's maritime history. It's also a gathering place for enthusiasts to share comments, updates on preservation issues, and photos. The site drew such a strong response that the book was a natural next step.
Between its glossy covers, this impressive work contains everything a person could want in the way of information about our country's historic maritime treasures, as well as some interesting articles. Whether you are doing research of a scholarly nature, or simply planning a vacation, the well-organized format (indexed by city) makes it easy to find not only heritage vessels and sites, but also organizations, educational resources, and more. In the "Museums" chapter, I was happy to see a large entry on the Foss Waterway Seaport here in Tacoma, but the book also contains the most obscure listings imaginable. Follansbee recognizes the importance of every single one.
I can't even imagine how much time it took to put all of this together. At $24.95, I would call it a bargain. Chapter headings include:
"Perhaps if people understand the breadth and scope of our heritage by presenting it in one place,"  he wrote in the book's introduction, "they might recognize that keeping our history is part of what keeps our country whole."

Sometimes the efforts of one individual add significantly to that history. This is one of those times, and I am among those who appreciate what Joe Follansbee has done. You will too.

University Place Celebrates Its "Patch" of Turf on the Web 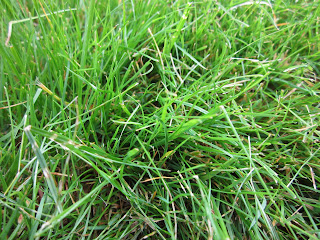 You didn't hear the rumble and roar of propulsion, but a launch took place today and is making history. The City of University Place, Washington, is the first in the state, and one of the first in the West, to claim its own edition of Patch, an exciting new phenomenon spreading across the nation faster than crabgrass but a lot more welcome. Editor Brent Champaco is already known as an award-winning journalist. He wrote for several newspapers, most recently the News Tribune in Tacoma, and brings to this new position a love for, and deep knowledge of, University Place, after covering this community  for several years.

So what is Patch? It's the web's latest, greatest way for people to get up-to-the-minute news, information, photos, and a chance to participate in all of those things through a website designed specifically for their community. Headquartered in New York, Patch is a dream now manifested for a team of professional journalists and others who want to give people in cities with populations of 15-100 K,  relevant, timely, useful, meaningful, and most importantly, HYPER-LOCAL coverage. What it is NOT, is another generic, one-size-fits-all website supposedly offering local information when it's all just gleaned from the web. University Place Patch get's its news by being a real part of the community. There's just one "place" it's about and that's University Place. People there are excited.

So am I, because I'm part of Patch too. Today you can read my story on the unveiling of the Terry D. Reim Memorial sculpture at the University Place Civic Building, taking place on October 16,1010. I'll be writing a regular column on the arts as well. So, in the words of Editor Brent Champaco, here's a welcome to the wonderful world of Patch. Watch it grow. Maybe your town needs one of its own.
Posted by Candace Brown at 12:42 PM No comments: