If Amelia Earhart's airplane had landed safely on tiny Howland Island, in 1937, instead of disappearing over the Pacific Ocean, there might not have been a movie "Amelia" debuting at theaters here in Tacoma and all over the nation this weekend. America's most popular woman pilot would still be famous. No doubt she would have successfully completed that last leg of her flight around the world, and gone on to break more records. But on July 2, 1937, when Earhart and her navigator, Fred Noonan, failed to show up on the island to refuel, she became the subject of a fascination that persists after 72 years.

Theater owners expect large crowds for this film, starring Hilary Swank as Amelia, and Richard Gere as her husband. But it won't be the only show in town. On October 24, the same weekend, a new exhibit called "In Search of Amelia Earhart" opens at the Museum of Flight in Seattle. Chris Mailander, Director of Exhibits, says, "This is possibly the most comprehensive exhibit about Amelia ever." He and Annie Mejia, PhD., Content Developer, spent months putting it together, gathering a vast assortment of artifacts, including some of Earhart's clothing, over 100 photos, newsreel footage, audio recordings, reproductions of newspaper articles, and much more. But the most compelling artifact is a real piece of Earhart's Lockheed Electra twin-engine plane.

How is that possible? Earhart's fatal trip, flying east, was actually a second attempt. On the first try she began by flying west. In March of 1937 she taxied to take off from Luke Airfield in Hawaii with her plane heavy with fuel, and had an accident. A member of the military named Dan Stringer picked up a piece of the wreckage and saved it all these decades. Earhart's plane was repaired and her trip eventually started over. And Stringer's souvenir eventually landed in the hands of his grandson, Jon Ott, in San Jose, California.

Mejia happened to watch Episode 706 of the PBS Television show "History Detectives" and saw the story of Ott's artifact and how researchers declared it authentic. Her excitement over this discovery, and her efforts on behalf of the museum, resulted in the piece of the plane being part of this exhibit.

After months of immersion in all things "Amelia," Mejia feels like she's come to know the real Earhart and like Mailander, eagerly awaits this weekend's openings of both the film and the museum's big event. "In the movie, Hilary Swank even wears a bracelet just like one Amelia wore," she says. But unlike the movie, the exhibit "In Search of Amelia Earhart" is no Hollywood production. It's the real thing. You'll end up feeling like you know this fascinating female aviator too.

The Museum of Flight is a "must see" any time. Even without Amelia Earhart to draw a crowd, over 400,000 people visited in 2008, according to Public Relations and Promotions Manager, Ted Huetter. He hopes this year's numbers end up even higher. "It's a Seattle landmark, a top attraction," he says, and you'll agree when you see over 150 rare and historically important aircraft and space vehicles, the Boeing Company's original "Red Barn" work shop, movies, reference library, vast numbers of photos, tens of thousands of artifacts, and more. He invites you to discover the real story that inspired the movie "Amelia" by visiting "In Search of Amelia Earhart." The thrill of aviation permeates this museum and, like Earhart, you just might fall in love with flight.

Museum of Flight
(at Boeing Field)


Posted by Candace Brown at 6:00 AM No comments: 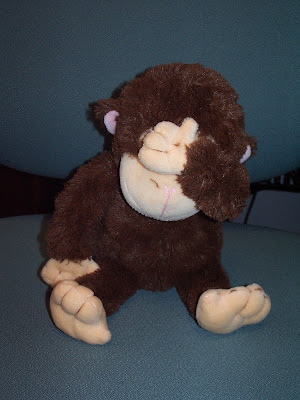 If all those grateful stuffed animals and dolls saved by Tacoma's Toy Rescue Mission in the past 20 years could put on red capes and fly in to save the day, they would. The puzzles are puzzled, the trains feel derailed, and little dump trucks are down in the dumps. And if that isn't bad enough, think how the kids will feel. What happened?

Maybe we all took it for granted that Toy Rescue Mission would be there forever, making sure local kids had gifts on birthdays and holidays. What the folks at TRM do might seem like magic, but behind it all is money. Right now that's running out. Thanks to the economy, Toy Rescue Mission faces its final days at the end of this Christmas season unless something miraculous happens. That's right folks. It looks like the lid on the world's biggest toy box will slam shut forever.

"We are seeking volunteer help one last time to make this the BEST Christmas Distribution TRM has ever seen," says TRM's President, Karol Barkley. "I don't need to tell you that, due to the economy, parents have lost jobs, incomes have decreased, as family needs continue to rise. Let's not let the devastating effects of this economy affect the joy that our community's children look forward to...especially at Christmas time!"

Just as all those dolls with missing arms, cars without wheels, and kids without toys have needed Toy Rescue Mission, now TRM needs us. Here Karol suggests some specific ways you can help:


Surely, there is SOMETHING here each reader can help with.

"The last thing we will need before closing our doors is volunteers throughout the month of January to help us through the painful closing process," Karol say. "None of us have ever done this before (we've always been in the "building," not "tearing down" mode), nor had any extra time to spend exploring the ins and outs of closing an agency. If anyone has experience in this area, their assistance would be greatly appreciated."

Thank you for your past loyal support and any you can now give!

The Day I Could Have Lost to "Busy" and "Soon" 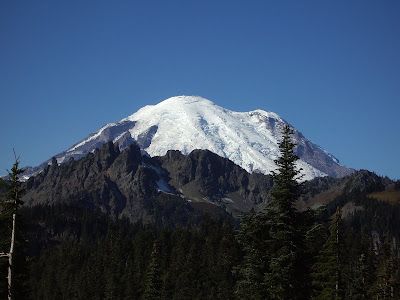 Don't assume the worst. I do see my Dad often, talk to him, on the phone, and help him out whenever he needs anything. I always make it clear that I love him. But in the hurry and scurry of my life I sometimes forget how little is going on in his. As I hung up the phone, I pictured him in his chair with the clock ticking on his apartment wall. As a daughter I do pretty well, but I could do better.

It seemed such a short time ago that I wrote a blog post about Dad called Raking in the Memories but it had actually been a whole year, another year gone by too quickly, one tick of the clock at a time. I remembered that last fall he hoped we could take a drive up to the mountains to see the vine maple turning red, and after saying "Sure!" and sincerely meaning it, things got "too busy," the leaves fell, and the long winter came. I looked outside at the perfect autumn day and picked up the phone to call him back.

"Hi Dad. It's me again. I just wondered if you have any plans for tomorrow," I said. "How about if we take a drive?" 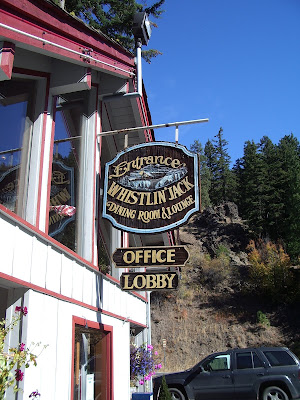 I didn't need to ask him where he'd like to go, but I did anyway. Of course it was his favorite place, out Highway 410 and over Chinook Pass to have lunch at Whistlin' Jack Lodge on the banks of the Naches River. My husband and I left Tacoma at 8:45 am and headed north to Renton to pick him up. He was out the door with his walker before we stopped the car.

Some days go by in a blur. On others, if we're lucky, we live each hour with the awareness that it is being imprinted on our memories. Tuesday, October 6, 2009: saved forever. Like opening an album of photos, or one of those calendars of national parks, I will still see the images of that day even when I turn 96. Breathtaking vistas spread out for our pleasure around each bend of the road. Dark green forests, Mt. Rainier, sparkling water, alpine meadows, rocky road cuts, fir and cedar giving way to pine, all made me feel like I'd returned to an aboriginal home and a poignant reunion with nature. I remembered what silence is and pure air. The distant horizon of peaks layered itself in shaded purples and blues. Then we saw what we came for. In every open space exposed to sun the vine maple blazed orange, rust, and red.

The best sight of all was Dad gazing out the window, probably thinking of all the years of vacations and day trips, of trying to see as much of America as he could. I remembered being a kid and watching him from the backseat of his Buick Electra. As one of his seven children, the realization that I understood and shared his love of going to places we'd never been felt like a secret, special, and unspoken bond I hoped was just between us.

"I miss driving," he said. I knew he wanted to feel his hands on the steering wheel again, the engine's surge, and the thrill of the road stretching out before him with some new discovery around the next curve. He gazed out the window. Sometimes he talked. Sometimes he didn't. For a few moments now and then, he dozed. But most of all he just enjoyed, pointing to maples and saying "There's some color." 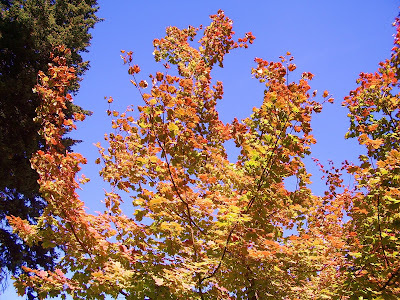 We ate lunch at a table next to the window, in Whistlin' Jack Lodge. Outside, the Naches River danced low over its rocky bed, still shallow before the autumn rains. Sunshine warmed the trunks of wind-tossed pines to a rich burnt umber color. Years ago Dad would have wanted to walk down beside the water. Those days are gone.

Never one to talk about the past, he surprised me with his answer to my question; did he remember his first trip to Mount Rainier? He did, in detail. As a young bachelor he had a Norwegian coworker and friend who wanted to see the mountain up close. So they packed up Dad's Star Touring car and spent a week camping at Longmire and Paradise. I'd never heard this story, and wondered how many more stories he had that I'd never hear.

When we took Dad home and said goodbye he repeated that we'd given him "a real treat." I hugged him and told him, with sincerity, that the pleasure was ours. We'd driven over Chinook Pass, then looped back to the west through White Pass, over 300 miles.We hadn't done this for him; we'd done it with him. As he walked away toward the elevator I though again about that four letter word "busy." Another one is "soon." I decided right then, I'm trading it in for "today."


IMPORTANT NOTE: Just days after this blog post was written a landslide closed part of our route through the mountains. Here's a link to the Washington State Department of Transportation with information about this situation: www.wsdot.wa.gov/News/2009/10/LandslideclosesSR410Chinook+Pass.htm
Posted by Candace Brown at 1:09 PM 3 comments: