A MEMORY OF PETE SEEGER IN SEATTLE

The death this week of a man many consider to have been America’s most influential folk singer and pacifist, Pete Seeger, brought forth tributes and memories from across the nation. I never had the opportunity to witness Seeger’s charisma in person, but another Northwest native I know did, and it happened in Seattle.
Al Price, an excellent banjo player and the sales manager at Nechville Musical Products, shared with me his recollections of seeing Pete Seeger perform live, along with his feelings about this great man’s influence. According to Price, the year was 1970. He was a freshman at Highline Community College, in Des Moines, Washington, with plans to major in journalism at the time.
“Part of our assignment for our journalism class was to write articles for the school paper,” Price said, “So, I decided that might be a great way to give myself an excuse to go see Pete Seeger at the Moore Theatre. Then I thought, Well, I’m ‘The Press,’ so I’ll just get an interview with Pete Seeger. It ought to be pretty easy!”
Wrong. However, Price did get as far as talking to Seeger’s manager, Harold Leventhal, who also managed Woody Guthrie and The Weavers, not a bad accomplishment for an eighteen-year-old. Leventhal told him the concert was a benefit for The Little School, located in Bellevue, Washington.
A woman named Eleanor Siegl—who received her training at Columbia University Teacher’s College—founded the school in Seattle in 1959, based on her passion for a progressive new approach to childhood education. She believed in treating children as respected individuals who should be involved in determining their own paths to learning. Her philosophy included teaching appreciation and respect for other people and cultures along with personal responsibility, and this approach incorporated plenty of freedom to play, imagine, and experiment, including time spent outdoors.
The Little School moved to its current location in Bellevue in 1968, where the legacy of Siegl’s vision continues to manifest in young adults with exceptional self-confidence and the ability to think and solve problems creatively. I contacted Head of School Peter Berner-Hays to see what he might be able to add to the history Price remembered. Intrigued by the discovery of a possible connection between Siegl and Seeger, Berner-Hayes began to look into the story, making inquiries of those who had been a part of the school for decades. After a few hours, he called back with some news.
“I’ve had a very interesting afternoon,” he told me. He had reached Siegl’s daughter, who confirmed that her mother and Pete Seeger had been old family friends, dating back to when they had lived near each other in New York.
According to Price, Leventhal claimed that Seeger would designate certain concerts as benefits, in order to reduce the tax dollars he would have to pay to a government he believed would spend the money on war.
“I thought that was pretty cool,” Price said. “I did everything I could do to meet him. I tried weaseling my way back stage, but it was impossible. But I went to the concert. What I was really struck by—and remember, this was 1970—was that there were young people and old people, people of all kinds.
“Pete came out. No band, of course. No opening act. No introduction. He just walked out on the stage, and he began to tell us that the very first hootenanny he ever attended was in Seattle. He and Woody Guthrie had traveled up here, and they were invited to a hootenanny by a guitar player they knew named Ivar Haglund. I went ‘Wow!’”
Price remembers watching Seeger unify the crowd through song, during a time when the generations were especially polarized.
“Pete started singing and he brought everybody together,” Price said. “Everybody started singing, and they had a grand time. That’s the night I learned what music can do to bring people together who wouldn’t ordinarily get together. It’s just that simple.”

He added, “It was a great experience. I’m glad I got to see him in person. I was thrilled to see him. He had no pretense. He was very casual, very relaxed. It was just him and that longneck banjo and that twelve-string guitar of his, and that was it.”
Price became a banjo player because of Pete Seeger and John Hartford. He told me they were the two who caught his ear and got his attention.
“With Pete, it was as much for his social activism as anything,” Price recalled, “Then, I found out he was really a wonderful banjo player.” He commented on Seeger’s ability to play the banjo in many different styles—old time, bluegrass, Caribbean, blues and jazz.
“He was great about bringing music from other cultures into the banjo,” Price added. “There’s sort of a parallel with our mission at Nechville, that the banjo be accepted not just in the U. S. but worldwide, and that it be used in all kinds of music and not just music from the southeastern United States. I’ve been thinking about that stuff all day and how it’s sort of funny that we’re still trying to do some of those things Pete was doing fifty years ago.”
Being members of the same generation, we pondered the nearly incomprehensible passage of time and the state of American society when we were children, especially where civil rights and personal freedoms were concerned. Seeger died an old, old man who had seen so much during the decades of his life. I can’t know his thoughts, but I would guess he must have been dismayed over the current divisions between rich and poor, the political bitterness and lack of cooperation, and the state of social justice.
“He was right on the front lines,” Price pointed out, “but he never lost his dignity or his integrity. I think that’s so admirable.”
Indeed. We both learned a great deal more from Pete Seeger than simply what he taught us in a thin little book called "How to Play the 5-string Banjo."
Posted by Candace Brown at 11:47 PM 1 comment:

URGENT LAST-MINUTE MESSAGE! Personal circumstances beyond my control prevented me from publishing this post earlier, but I hope some of my readers can still attend the 2014 Ways of Whales Workshop on Saturday, January 25. This exciting annual event takes place at the Coupeville Middle School Performing Arts Center on Whidbey Island in Puget Sound from 9:30 a.m. until 4:30 p.m. It promises to be a day of wonder for anyone interested in the endangered Southern Resident orcas, as well as their fragile food source: endangered salmon.

These beautiful and amazing creatures are, unlike most of us, truly native to the Northwest, and some of the region's most respected experts will advocate for them by educating the public about current threats to the survival of both species. This year's workshop focuses on the theme of Saving Iconic Northwest Species—Southern Resident Orcas and Salmon. The goal of the event is to bring people together and inspire them to partner effectively in their actions to preserve and protect. 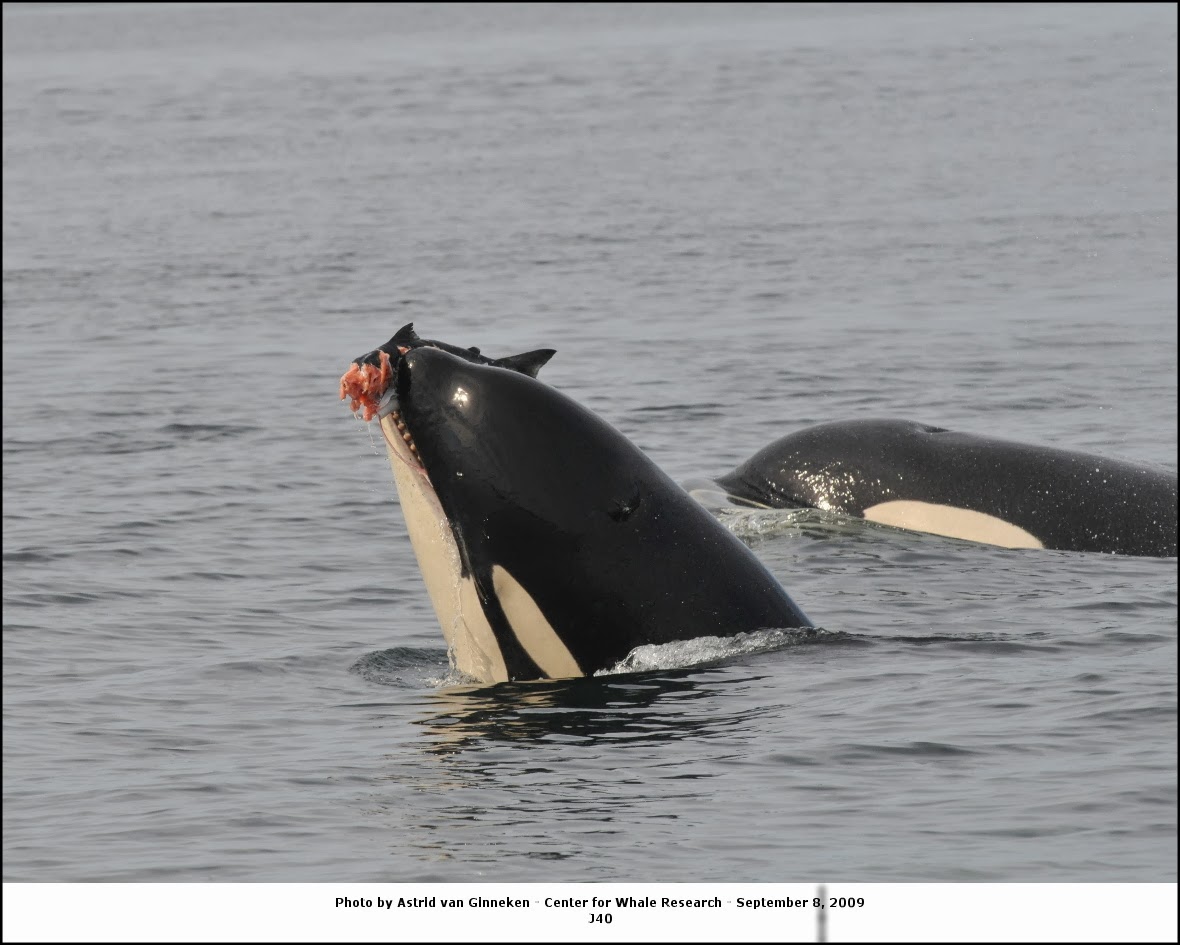 Here is the impressive list of presenters, panelists, and topics of discussion:

Cost of the workshop is $30 ($25 for Students/Seniors), and a hot lunch is available for purchase for an additional $10 on an as-available basis. Pre-registration is highly recommended, as seating is limited. Further information and online registration are available at www.orcanetwork.org. Questions? Contact Orca Network at info@orcanetwork.org or 360-331-3543 or 1-866-ORCANET. 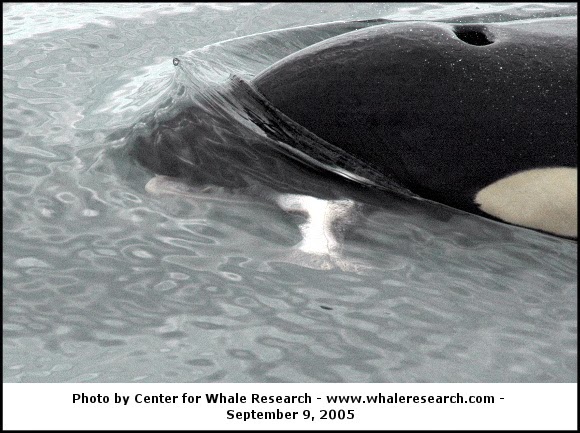 All photos courtesy of Orca Network.
Posted by Candace Brown at 9:29 PM No comments: