I looked forward to the musical “Grease” at The 5th Avenue for months, but came away with mixed feelings. This production, which runs July 9-Aug. 2, 2015, got off to a great start. The Dusty 45s, a 1950s-style Seattle band, opened the show, supposedly playing for a reunion of a Class of ’59 from a fictitious high school. Led by the energetic guitar and trumpet player Billy Joe Huels (Johnny Casino, here) every member contributed rocket fuel for a blast of a performance leading into the musical, and other fine musicians joined them later. That music set the mood and was probably the main reason most of the audience went wild for this production, directed by Eric Ankrim. That audience included people ranging in age from those young enough to think of the ‘50s as their grandparents’ era to those who probably did graduate in 1959.

The problem with this show was that it is neither raw enough to feel painfully realistic nor sweet enough to come across as pure hokey nostalgia. Some of the things said, done, and talked about, especially in mixed company, were just too far-fetchef, if you wanted nostalgia. On the rougher side, the raunchy trash talk seemed gratuitous, like a added dose of token "bad ass" but not convincingly scary, just crass.

In spite of that, everyone in the cast performed well within the confines of their roles. The 5th Avenue’s version of Grease does have plenty to offer if you want to spend a fun evening immersed in a clichéd view of the ‘50s with a Mickey-Mouse-Club-turned-naughty feel. The male lead, Bryan Gula, as Danny Zuko of the “greaser” crowd, and Solea Pfeiffer as the proper good girl, Sandy Dumbrowski, did not entirely convince me of their teenage angst and frustration, but they gave it a good try. Petite fireball Kirsten deLohr Helland will be remembered for her edgier role as bad girl Betty Rizzo (who actually had more depth and integrity than some of her peers), but she had a bit too much of an attitude at times. Fortunately, Helland did a fine job of bringing out Rizzo's humanity when it counted, giving this musical a badly needed touch of real drama. Kudos to her.

There were other good voices, but I did not like the way the microphones affected them and sometimes thought they were too loud in comparison with the live music. I loved the choreography throughout. There was a lot of talent on that stage, a lot of it very young talent, but the cast also included veteran actress Marianne Owen, who played the one adult in the musical, Miss Lynch. Owen always gives a great performance. I enjoyed and appreciated Harmony Arnold’s costume designs, Christopher Mumaw’s stage sets, and Tom Sturge’s typically perfect lighting.


People in the audience seemed to love this show. The woman sitting next to me could possibly have been in high school in the late ‘50s, and she and her friends were having a great time. She whooped and whistled, moved to the music, and applauded wildly. Meanwhile, I sat there next to my equally quiet husband, thinking, Man, what’s wrong with me? I must be way, way too serious. I did enjoy it, did applaud, but in spite of great performances and fun music, I just didn’t feel truly engaged, much less on the verge of swooning, and some of it irritated me.

As we watched what was supposed to be these characters' mapless journeys from the struggles and insecurities of youth to adulthood, I suspected that most of them would miss the turnoff and never reach their destination. This had to be the most immature bunch of high school seniors ever, posing as tough gang members and their girlfriends. I questioned why this musical celebrates Sandy's rise in social status gained by completely succumbing to peer pressure, giving up her good girl looks and ways for sleaze appeal, as victorious. According to the program, this was a transition from “uptight teenager to a joyful young woman,” as if cigarettes, tight pants, a boy friend who treats you badly, and conformity necessarily lead to a joyful life. (I wonder how Sandy looked at the 30-year reunion.) 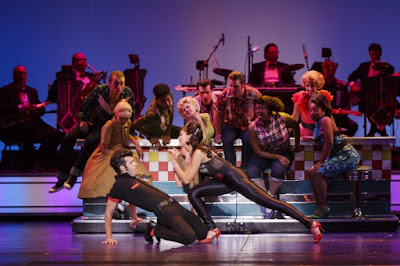 Maybe the problem was that my memories of 1959 are those of a very young child from what people would have called a "respectable family" in a small town. My older sister and her boyfriend were high school seniors about that time. My sister could have stepped right out of a 1950s movie role. Pretty and popular, she lived, it seemed to my four-year-old self, in a magical swirl of high school clubs, dances, football games, wool skirts and sweaters, saddle shoes, record players, 45s, and all. From my adult viewpoint, there’s little doubt that beer, cigarettes, and sex entered into the picture during their teen years too, but those things never entered my innocent mind at the time I was making my own memories of the late '50s. The closest thing to Grease in my young life was whatever my sister’s boyfriend used to slick his hair back into a D.A., and I adored him. After all, he let me sit on his lap and steer his car.

This fascination with the ‘50s puzzles me sometimes. I asked my husband why he thought that decade became symbolic of carefree youth, fun, and happiness, when in reality, it included the Korean War, McCarthyism, segregation, bomb shelters, and a post World War II society that pressured women back into the Betty Crocker cookbook role of subservient housewives, after they had held vital jobs in the defense industry. Why are so many people so in love with a fantasy?

He’s right, I’m sure. An evening spent watching Grease at The 5th Avenue will definitely energize you. Go. Have fun. Just don’t believe everything you see and hear.

Posted by Candace Brown at 2:17 PM No comments: