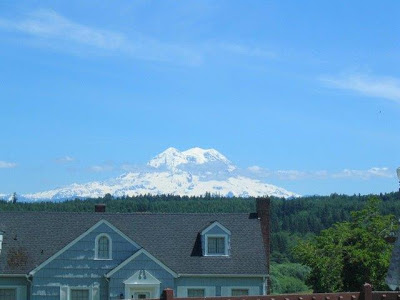 Some people might not know about Roy, Washington, but this little gem of a rural community is located in one of the prettiest spots in the Pacific Northwest and it's the place to be during the sunny weekend ahead. Near Roy you will find the Rainier Antique Tractor Club’s annual June Jubilee “Down on the Farm” event, two days of FREE fun for the whole family. It happens at Wilcox Family Farms, 40400 Harts Lake Valley Rd, in Roy, on Saturday and Sunday, June 29 and 30, from 10 a.m. to 4 p.m. each day.


﻿
RainierAntique Tractor Club President Mark Loken said, “The Wilcox family is gracious enough to provide a beautiful setting—with Mt. Rainier in the background—for a weekend filled with family fun. That includes hayrides, a tractor pull, a display of antique tractors and horse drawn fire equipment." (If you love antique tractors, you should know about a magazine called Antique Power.)
The club’s slogan for this year’s June Jubilee is “Come see where your food comes from!” There will be plenty of food on hand, including FREE OMELETS all day, made from fresh Wilcox eggs, plus hamburgers and hot dogs for sale.
﻿


﻿You can also take a tour of the Wilcox hard-boiled egg plant.

Hard-boiled egg plant? I’d never heard of such a thing. They cook, peel, and package these eggs for the ultimate summer time saver, perfect for potato salad, sandwiches, deviled eggs, or picnics. Wilcox has been around since 1909 (see history) but the old farm has kept up with consumer demand. In 2005 Wilcox Family Farms committed their business to more natural and sustainable practices, transitioning to cage-free, vegetarian, and organic egg production, with chickens living like chickens should, outdoors and eating an organic diet.
Doesn’t this sound like fun? Think about how long it’s been since you were on a farm, and with the clear skies promised in the forecast, Mount Rainier should be gorgeous. From Roy, it seems close enough to reach out and touch. Why not do something different with the kids this weekend? Here's a map.

Now you can "like" Good Life Northwest on Facebook, so I hope you will.
Posted by Candace Brown at 6:00 AM No comments:

When it comes to spending "An Evening With Groucho," once is never enough.


That was my conclusion after attending the show by that name, now playing at ACT- A Contemporary Theatre in Seattle. It runs June 13-30 in the Bullit Cabaret, presented by The Central Heating Lab and is a return visit by Frank Ferrante, a actor and director who impersonates the famous comedian Groucho Marx so perfectly it's spooky. No wonder he has been a sensation in New York, London, and on PBS. You can experience a taste of his transformation from Ferrante to Marx in the video below.

See how he seems to acually become Marx right there on stage as the audience watches.


I had witnessed Ferrante doing his thing at ACT a year ago (see review from 2012) and wondered if it would feel like nothing more than a rerun. But at the matinee last Sunday—technically "An Afternoon With Groucho"—I realized two things almost immediately: 1.) Even with some of the same aspects, the show felt freshly entertaining, and 2.) Watching Ferrante think on his feet with lightning-fast reactions, for a second time, made him seem even more amazing than I my initial impression. And that is saying a great deal.

Some might call it a one-man show, but Ferrante's accompanist on piano—this time the talented Mark Rabe—played not only the baby grand but also an important role as the straight man. His facial expressions and reactions to Ferrante's lines were right on, and even though he uttered only a few words, he packed them with punch. He is also a fine musician who played the instrument beautifully.

﻿
While giving us a picture of the personal and professional lives of Marx and his famous brothers, he also spoke the famous lines we wanted to hear, danced, sang songs, acted silly, leaped onto the couch or piano, impressing us with his athleticism. But best of all, Ferrante did just what his idol would do; he connected with individuals in the audience and poked fun at them with off-the-cuff humor that, while never really mean, was absolutely hilarious, as humane as humiliation can be. And there was no way that any of this had been rehearsed. Of that, I'm sure. At every performance he faces a different crowd and finds funny ways to make them squirm as he fires off comments and questions that crack up everyone. Even if the show incorporates some of Marx's classic bits, the spontaneity of Ferrante's wit makes every performance new. And since they are selling out, I recommend you order your tickets right now.

Since I happened to see the show on Fathers Day, the packed audience at 2 p.m. included a surprising number of children and teenagers. If you're thinking of bringing your own, go right ahead. Neither the language or innuendos should give you cause for concern and are certainly far, far more tame than what kids hear every day. Ferrante interacted with many of these young folks, and I thought treated them very nicely. He teased only gently and they clamoured for his attention.

Let me put it this way; there was only one Grouch Marx, but I doubt his talents were any greater than those of his impersonator. I'm sure he feels honored. You bet your life.
I hope you will "like" Good Life Northwest on Facebook.
Posted by Candace Brown at 4:14 PM No comments: 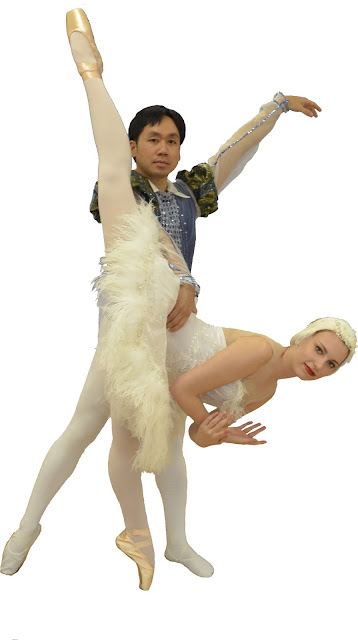 Just when we could all use something uplifting, along comes “Collections,” Dance Theatre Northwest's combined Spring Concert & Annual School Recital. It can change your whole outlook and give you faith in the next generation. Two shows will be offered in Mount Tahoma High School’s beautiful auditorium at 4634 S. 74th, Tacoma, WA 98409, on June 22nd, at 2:30 and 7 p.m. 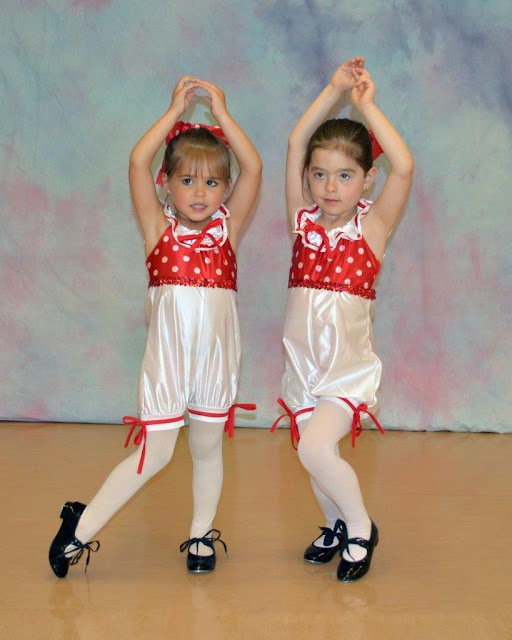 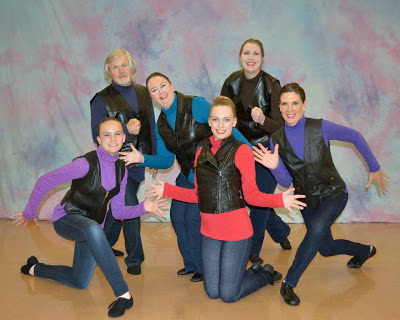 "Dance Theatre Northwest continues to thrive because of its amazing members,” Artistic Director Melanie Kirk-Stauffer told me. “The program we will present next weekend is a fabulous example of how people working together can produce something extraordinary.”
Kirk-Stauffer dedicates her life to teaching dance and inspiring her students, which would be more than enough for most people. But she also does the choreography, designs the costumes and stages the performances. 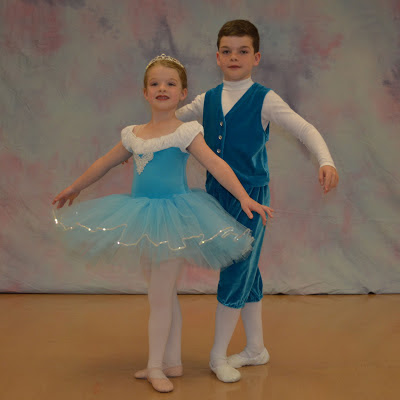 Her students, in turn, dedicate themselves to perfecting their art, with Associate Artistic Director Vadne Domeika making major contributions toward their development and the public performances. The results of all that love and hard work show in every move and serve as a testament to goal setting and encouragement. I wish all young people could see how some of their peers have learned focus and perseverance, life lessons that will help them realize their dreams. 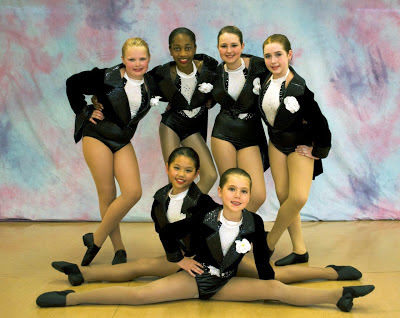 "I am especially proud of our dancers and staff along with the numerous volunteers that have helped to make this show something that will be beautiful and uplifting, and it has been a lot of fun producing so many new pieces."
For tickets and more information or call 253-778-6534 or see www.DTNW.org  Tickets are available online or at the door. Prices for children and seniors are $11 - $13, Adults $22- $26. Ask about military and group discounts. All photos by Maks Zakarhov. 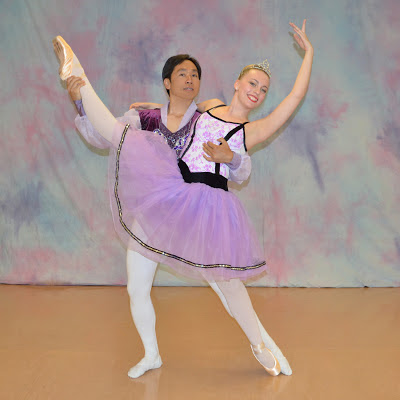 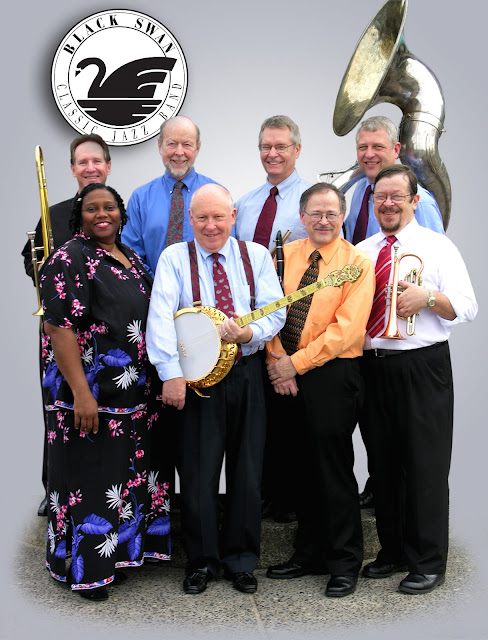 Here in the Northwest, June means sunshine (we hope), roses, baseball, local strawberries, and … jazz. Yes, jazz, America’s music. It’s time once again for the long awaited Jazz@TMP show presented each June by the Tacoma Musical Playhouse and producer Lance Buller, the well-known trumpet player who draws crowds to Maxwell’s every Friday night with his trio. Each year, his show at TMP features a different band, and 2013 will be remembered for "Sweet and Hot," a ONE NIGHT ONLY special event featuring the Black Swan Classic Jazz Band from Portland, Oregon and their vocalist, Marilyn Keller. This is jazz a la New Orleans. The fun begins at 8 p.m. 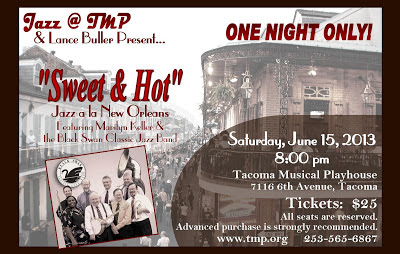 “Black Swan will serve up blues, stomps, marches, ragtime and gospel,” said the band’s leader, Kit Johnson. “Songs will be selected from the 1890s through Tin Pan Alley through the Golden Age of song to selections recently composed by our band members.” (Listen to "Joe Avery's Piece.")

Traveling back in time to these earlier musical eras is as easy as driving to Tacoma where the Tacoma Musical Playhouse is located at 7116 Sixth Ave., just blocks from the Narrows Bridge. When the band begins to play, you might find yourself transported to the French Quarter of New Orleans in the 1920s or F. Scott Fitzgerald’s novel The Great Gatsby. But instead of a movie score, you can hear the authentic sound of America’s classic jazz and more, performed live.

This well-known ensemble has been popular at festivals and many other public and private events since it began in 1989. Marilyn Keller performs songs as sassy as a night at a speakeasy, or deeply moving gospel tunes and ballads, with equal ease. You can listen here, and here. For several years, she has performed in Denmark as a guest with New Orleans Delight jazz band. 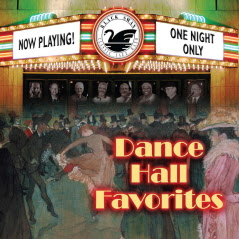 Buller describes this year’s production as “… an incredibly entertaining show, with a pinch of music education, and a whole lot of fun for all ages!” His partnership with the Tacoma Musical Playhouse goes back several years, with Jazz@TMP now eagerly anticipated in the community. The venue is ideal.
Johnson looks forward to bringing Black Swan to TMP. “Hot jazz demands intimacy between the musicians and audience,” he said. “The theater setting allows us to get cozy with the listener, to feed off their energy, and to infuse that enthusiasm and closeness into the music.”


Come get cozy for a delightful evening of "Sweet and Hot" music at this year’s Jazz@TMP. But don’t wait too long to buy your tickets because seats are reserved and demand will be high. You can purchase yours now through the online box office or by calling (253) 565-6867. Tickets for all seats are $25.

Good Life Northwest on Facebook
Posted by Candace Brown at 12:28 PM No comments: