ADRIANA WILLSIE'S ART FILLS US WITH ENTHUSIASM FOR THE NEW YEAR

I've featured many images in my blog during this past year, but none have pleased me more than this one, a painting by my niece, Adriana Willsie. Her work always uplifts and inspires me, but none more so than this image of a fresh, snowy, alpine landscape with blue sky and sunshine. That's why I'm offering it as my New Year gift to you, along with some thoughts about what I see in it.

Doesn't this painting symbolize the kind of year we all want?

She is a native of Washington, now living in Wisconsin. The Northwest still influences her art work, even though most of her paintings are pet portraits. Here is her own New Year gift, a video slide show of beautiful animals she has painted for clients as custom orders. Just click on the arrow on this dog's nose.

If you love "Winter in Tahoe" as much as I do, you can order prints and note cards of this and other paintings from the artist's website:

HAPPY NEW YEAR TO ALL! THANK YOU FOR READING GOOD LIFE NORTHWEST. 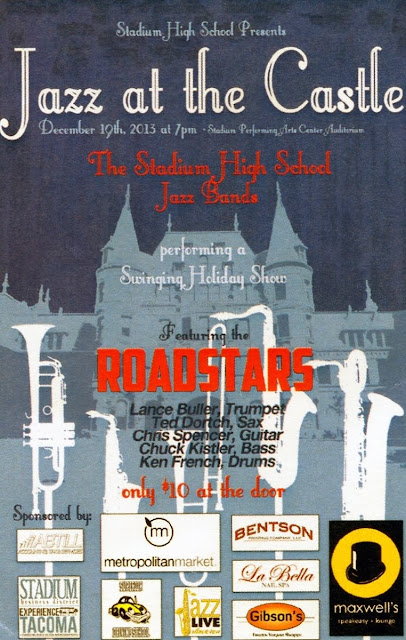 ﻿
﻿
Castles and magic go together and never more so than this Thursday night, Dec. 19, at 7 p.m., when the acclaimed jazz trumpeter Lance Buller and Tacoma's Stadium High School offer some musical magic with “Jazz at the Castle.” This swinging holiday show will be held in the performing arts center at Stadium High School, the city's historic landmark that looks like a castle.
Buller handpicked outstanding musicians Ted Dortch (sax), Chris Spencer (guitar), Chuck Kistler (bass), and Ken French (drums)—with professional credits like his, including movie and TV soundtracks, theater shows, multiple recordings, and live concerts around the world—to join him as the “Roadstars” for this spectacular evening.
“They have spent their careers making other people sound great,” Buller said. “Now it's their turn. In other words, run for cover!”


In addition to the Roadstars, two jazz bands made up of Stadium High School students will also perform. Buller shaped his own professional life through perseverance, focus, and dedication, the same qualities he teaches teenage musicians, with amazing results.
﻿"It makes getting up at 5 a.m. all worth it when you hear them play, and see the joy in their eyes,” he said. "Having been a professional musician for 40 years allows me to know the little things that can make ‘good’ turn into ‘great.’”


Support these hardworking young musicians by attending this event and treat yourself to a memorable evening with the Roadstars at the same time. It will be a swingin' good time, folks, so don’t miss it! You can also hear the Lance Buller Trio at Maxwell's in Tacoma every Friday night.
Stadium High School is located at 111 North E. St. in Tacoma, WA 98403. Tickets are only $10 at the door.
Please "like" Good Life Northwest on Facebook.
﻿
﻿
Posted by Candace Brown at 11:44 AM No comments:

"A CHRISTMAS CAROL" AT ACT TOUCHES THE HEART DEEPLY -- A REVIEW

﻿
My emotional response to a simple bit of music and a few props embarrassed me. Tears pooled in my eyes before the production of “A Christmas Carol” at ACT—A Contemporary  Theatre in Seattle even began. As I took my seat, traditional English Christmas hymns moved me with the melodies and words I've heard all my life, and I stared at the scene of an street lamp with icicles, swirling snowflakes, and the drab sparseness of Ebenezer Scrooge’s office. Without the actors, it looked as empty and cold as Scrooge's heart seemed to be, yet “A Christmas Carol” is actually about warmth. It is about humanity’s deep well of hope, love, goodness, and even joy, even in the bleakest of times.


“A Christmas Carol” opened at ACT on November 29 in ACT’s Allen Arena and closes on December 29. Although you still have about two weeks left to see it, many shows have already sold out. Hurry to get tickets before you miss your chance. You will love the fine acting, the scenes, the perfect period costumes and most of all, the timeless message that people matter more than money and that the power of love changes everything.
For 38 years, the theater at 700 Union Street has presented Charles Dicken’s classic tale of the mean and miserly Scrooge, his employee Bob Cratchit (Justin Alley), and Cratchit’s impoverished but loving family, including his crippled youngest son, Tiny Tim (Anna Ostrem). We have all met the ghosts of Christmas Past, Christmas Present, and Christmas Yet to Come. I can’t count the number of versions of this story I’ve seen on stage and screen, but I had never actually seen ACT’s production and wondered how Gregory A. Fall’s adaptation of the well-worn tale, directed by John Langs, could prove to be much different. Trust me. It is.
On the night I attended, Artistic Director Kurt Beattie starred as Scrooge, but he is alternating with Peter Crook in this role. Behind Scrooge’s sharp tongue and bitter scowl hid a man who once knew love but did not cherish it. We all sat spellbound and silent. I should say silent except for two young children who for some reason burst into hysterical giggling every time they heard “Bah, humbug!” (By the way, no children under the age of five may attend.)
An audience made up of several generations shared moments of tenderness, heartache, and humor while some of the best special effects I’ve ever seen on stage gave the ghostly visitations realistic eeriness, using dramatic lighting, mists, and props rising or descending through the stage floor. They caused the little girl next to me to cuddle closer to her adult companion and hide her face in a sleeve.
Beattie’s talent as an actor is equaled by his talent as a writer. His letter in the program, along with the words of Director John Langs, could be two of the most touching and uplifting pieces of writing you might read this season. I also enjoyed learning more about Charles Dickens in an article in the program, such as how he hated many of the same social and economic injustices affecting the present time. The classic story has never felt so relevant.
Ebenezer Scrooge teaches us a lesson about regret. Don’t cause yourself any by missing “A Christmas Carol” at ACT. I missed it for 37 years, but I won't again. Go expecting to feel uplifted, nostalgic, serene, and reminded of the strength of the human spirit and the importance of kindness toward others. You might even find, in the shadows and mists, your own ghost of some Christmas Past.
For directions, parking, and other information, click here or call (206) 292-7676. 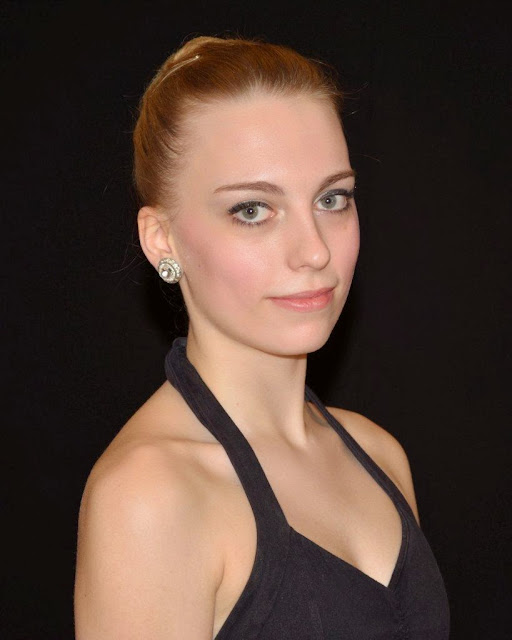 We can all relate to the song, "There's No Place Like Home For the Holidays," but to ballerina Katherine Neumann, who grew up in Olympia, Washington, the word "home" means more than her family's loving household.

"Dance Theatre Northwest will always be my first dance studio home," Neumann said in a recent interview for Good Life Northwest. No wonder. She began to learn dance from Artistic Director Melanie Kirk-Stauffer at the studio in University Place, Washington, at the age of four, became a member of the DTNW dance company, and also taught there. She currently lives in New York and studies dance at Steps on Broadway. Kirk-Stauffer is delighted that Neumann could make the trip home to dance the role of the Sugar Plum Fairy in studio's annual production of "The Nutcracker" as she has done before. 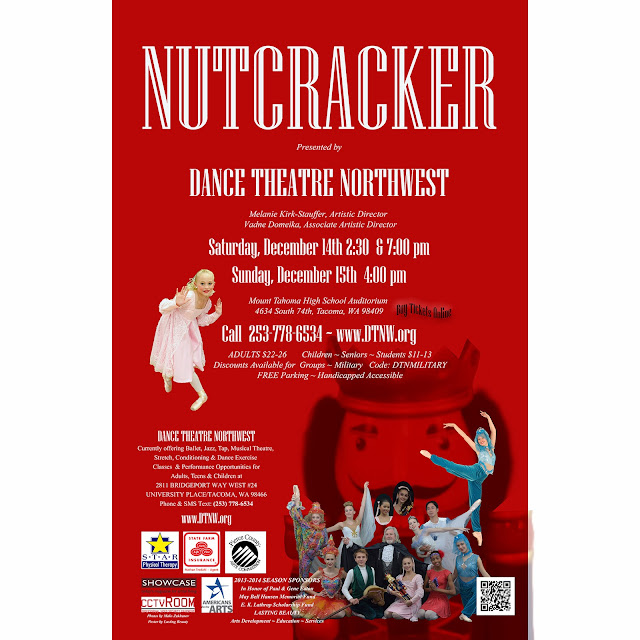 "It's been very affirming going there," Neumann said of her experiences at Steps on Broadway. "A lot of the teachers ask me where I got my dance training. They all say I've had excellent training, so that's been nice. It just reaffirms what I already knew about Dance Theatre Northwest; it's a great school and you get great training there."


﻿
She appreciates the warm homecoming welcome from not only her own very supportive family, but her DTNW family as well.

"It's great to see all the other girls and how much they've improved since I've been gone," said Neumann, whose heartstrings stretch across the nation. "They send me messages in New York and talk about how they're working really hard for when I come home. We inspired each other to keep working hard, even though we're far apart."

Even though Neumann has starred in this ballet many times before, it changes and improves each year. She looks forward to applying the additional skills she has acquired at Steps on Broadway. Kirk-Stauffer, keeps DTNW's "Nutcracker" fresh and exciting with new costumes and choreography. She and Associate Artistic Director Vadne Domeika, and all the dancers have been putting in long hours preparing for this delightful event. If you've seen it before, you haven't seen it like this, so order your tickets right away.

"She's rearranged a lot of the pieces," Neumann said. "Every year it's a little better. It just keeps growing and improving. It's exciting! It's going to be a really good show."

Posted by Candace Brown at 9:08 AM No comments:

Here in Tacoma, we know how to welcome Santa in style, even if it’s 19th century style. On Thursday, Dec. 5, he arrives at the historic Job Carr Cabin Museum in the city's Old Town neighborhood, for the annual Tree Lighting and Santa Visit event taking place from 4 p.m. to 6 p.m. The cabin is located at 2350 N. 30th Street in Tacoma, on the grounds of Old Town Park. Here are driving directions.
Would kids rather see Santa in a boring shopping mall or a real log cabin, all decorated for the season? It’s a no-brainer! Give them a great experience they will remember. With most families, weekends in December fill up with activities quickly, so this delightful, educational family event on a weeknight evening presents a perfect opportunity for fun or the beginning of a new tradition.

The Tree-Lighting is co-sponsored by Job Carr Cabin Museum and Old Town Business& Professional Association. There are many positive reasons to attend this event.

Photos with Santa in the cabin are free, and offered on a first-come, first-serve basis. Numbered tickets will be handed out as people arrive, so be sure to arrive early. You can park on the street.

Donations of non-perishable foods will be accepted at the event, and given to the Food Connection.


Hot chocolate and cookies will be served (while supplies last) free-of-charge. The cookies are purchased by OTBPA as a fundraiser for Toys For Tots. 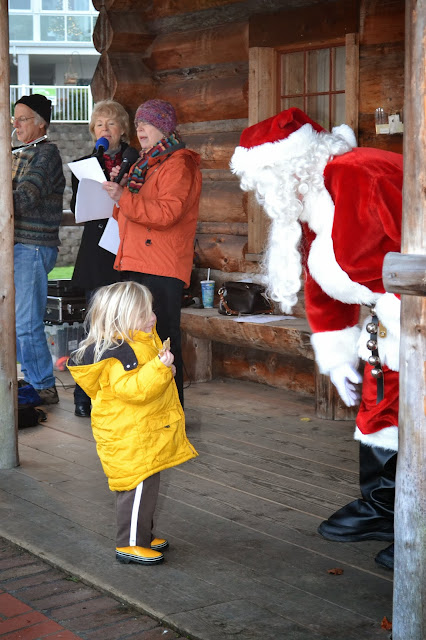 Posted by Candace Brown at 1:44 PM No comments: