Back in Your Own Backyard- the unstructured childhood 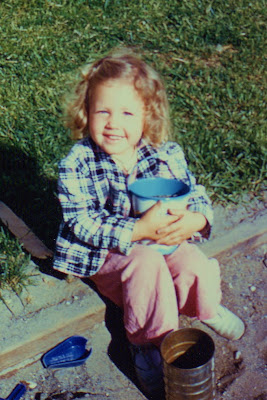 Have you played outside today? I remember when every day, except during extreme weather, included playing outside. It ranked up there with the three main features of life as a child: eating, sleeping and going to school, all of which adults controlled. That fact brings me to the distinction everyone seems to be missing these days: PLAY TIME BELONGED TO US.

We owned that open, unstructured time, to do with as we pleased. It made us aware of something larger than ourselves, a world we all belonged in together. The quality of that time, whether it proved to be fun, or not so fun, depended entirely on our own creative imaginations, social skills, and problem solving abilities. It made us healthy and happy.

I feel lucky. We had plenty of open space, beyond just lawn. a big lawn. Our two-and-a-half acres didn’t include woods but did have a huge hay field with grass tall enough to hide in when you’re little and one of many well compacted paths from one neighbor's house to another. Brush and cattails hid a frog pond. We climbed trees, scraped our knees, dug deep enough in our sandbox to capture wiggly earth worms down where the dampness remained. We got dirt under our fingernails. Our play equipment included old blankets, boards, sticks, barrels, ropes, sand, water, mud puddles, tin cans, hammer and nails, etc. It also helped to have a mother who didn’t care if you got dirty as long as you wore your coat and rubber boots, if needed, and washed up before supper. Wasn’t I lucky?

My own sons had a different childhood than mine, of course, but it still contained some of these elements, the most important being unstructured time. They had woods to play in, built “camps” and explored, could walk to a nearby stream, and had safe places to ride bikes without constant supervision. Sure I worried about them, but with some lessons in safety and common sense, they survived, and like my generation, ended the day with rosy cheeks and a good appetite.

When I walk around my Tacoma neighborhood these days I wonder where all the kids are. I see very few. Sometimes they're on the sidewalks on bikes or skateboards or sometimes walking. Often they’re plugged into an iPod or talking on cell phones. I do see them on city playfields participating in organized sports. True, that means fresh air and exercise, but it isn’t the same thing as chasing each other around playing hide and seek or some other made-up game. The place I see them rarely is in their own backyards. Interestingly enough, research shows that even kids in rural areas now spend as much time indoors as city kids. Is it any wonder we now see so many children, including the youngest, with problems like obesity, symptoms of stress, poor attention spans and sleep disturbances? I worry about them, and I’m not alone.

In 2005 a man named Richard Louv published a book of major importance, called Last Child in the Woods-Saving our Children from Nature-Deficit Disorder. This book became a catalyst for a movement to get kids back outside, and in 2008 Richard Louv was awarded the Audubon Medal. Washington State Parks has joined this cause with its No Child Left Inside program. I've also discovered a great web site called Green Hour, meant as a resource for parents and run by the National Wildlife Federation. Another good one is Let’s Go Outside sponsored by the Fish and Wildlife Service. Just type something like “kids and nature” into your search box and you’ll find more.

I feel sorry for kids living in apartments, but even in the city a vacant lot or stand of trees can mean a place with bugs to catch and rocks and leaves to collect, or room to act out a pretend scenario. Our future depends on the next generation having people who know how to think for themselves, come up with creative solutions, cooperated, and most importantly, care about our planet. All of those come from playing outside. And don’t forget this: it isn’t just for kids. Even if you’re an adult at work when you read this find a minute to GET OUTSIDE and breath some fresh air, feel the refreshing chill of autumn, hear a bird sing. Dig in your garden, rake leaves, go for a walk, have a foot race with a giggling kid. Come on. The sun is shining out there. It’s good for you. Just ask Mom.


Note: Comments are welcome, especially information to share with people living in the Pacific Northwest about this movement in our area. Thanks!
And yes, that's me in the sandbox in 1956.
Posted by Candace Brown at 9:30 AM

I couldn't agree with you more. I was raised in a small town where we spent many hours in our own backyard as well as the neighboring fields. I slept like a rock each night.
My own children are being raised in a busy part of Tacoma, and I try to bring them outdoors as much as possible, although it is more challenging for me. I have our busy street, a fearless toddler, and sometimes unwelcome additions to our neighborhood (ie creepy people or stuff) to content with. We do have our own big fenced backyard with slides, toys and all the fixins. More than they could ever need, because what they generally spend their time doing is digging up the plants in my garden or picking green tomatoes. Oh well, it gets them outdoors.
One thing I love that my children get that I didn't is what I call "city walks". We simply stroll our 'hood, and there is a lot more for them to see here. Good and bad, we often move quickly through some stretches. :) They enjoy it, we all get some excersize, and it makes us more a part of our neighborhood.

I also thought of my childhooe when reading your aticle. We were gone from morning to night going home only for something to eat or use the bathroom. Playing tag, hide - seek, kick the can or work up (remember that one?)kept us busy. Mom only had to stand on the back porch or front porch and yell my name. Some moms would use a whistle with a special # of blows to indicate if they had to go home. We were fortunate to have a fenced in park just 1/4 block from our house so our boys could go down and meet up with the neighbor kids. We could see them from our deck and once again history could repeat itself in that I could yell from our house for the kids. They are now grown and out on their own, but the park was used by them even when they were going to college. They would have an annual Turkey Bowl Football Game. They would hope for the rain, muddier the better. Guess some don't grow up for quite awhile.
Thanks Candace for reminding us all of the good things in life.