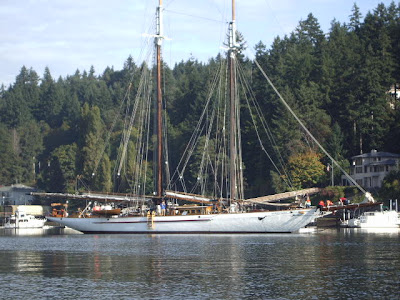 Last Sunday morning the autumn colors of maple trees stood out among evergreens on the hills around the still sleepy town of Gig Harbor, all reflected on calm water. But the focal point of the scene floated out beyond the marina: the ninety-five-year-old wooden schooner Adventuress, peacefully at anchor from the previous night.

I’m a member of Sound Experience, the non-profit that owns the ship, but thought I’d already had my last day of sailing on Adventuress this season. I wrote about it in last week's blog post Setting Sail for the Future (published Oct. 8th) . It explained the Adventuress Self & Sound program, through which girls between the ages of twelve and eighteen had the opportunity to spend ten days on the ship, six of which would take them on a continuous voyage around Puget Sound, learning about sailing, the environment, and most of all about themselves. I said I wished I could be a teenager again. That wish did not come true, but another was granted. I could come back aboard and spend the day sailing with these girls, in the role of reporter. Elizabeth Becker a profession photographer and staff member of Sound Experience, joined me on the dock. Soon we found ourselves in an inflatable boat, gliding rapidly toward Adventuress, while flocks of birds skimmed over the water beside us before curving in one graceful arch, up and away. It seemed a metaphor for the uplifting experience to follow. 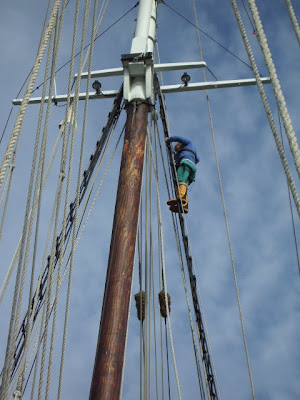 Before my eyes girls changed in the course of a day. I watched them overcome fears, face challenges, learn and grow. Those who'd been afraid of heights felt victorious going aloft. Though safe in harnesses and well supervised it still meant daring themselves to take what seemed like a very real risk. No one felt pressure to do it, but most did go up.

"I was afraid to do that before but it was really fun" said one girl, grinning widely, after she came down from climbing the rigging. It came as just one more new experience in a week full of them. Some kids had never been away from home, had so many rules to follow, or chores and responsibilities like doing dishes with a bucket of water, cleaning heads and swabbing decks. They also gathered for classes on everything from marine biology to navigation. All of that still left plenty of "down time" to read, talk, try a new musical instrument, or just daydream. But purpose shaped these six days.

"One of our goals is for them to be able to raise the sails all by themselves," said Captain Mary Beth Armstrong. She and her excellent all-female crew gave these young sailors a safe, warm, and supportive environment in which to try new things and learn more about themselves and their own capabilities. I loved hearing the girls proudly using nautical terms they'd learned, or each take their turns as "trainee watch leaders", calling out orders for handling lines and raising sails, leading the sea shanties to keep the time during hand-over-hand hauling. In fact, except during muster when they had to listen quietly, it seemed a lot of singing went on along with the continuous stream of activity I observed. I kept busy writing and recording comments while Elizabeth took hundreds of pictures, all for a future article we're doing.

Despite a lack of real wind we did have creamy canvas sails arching above our heads as we left Gig Harbor and set a course south through the Narrows. I've lived here all my life and never before saw the houses clustered along the shore at Salmon Beach, or how the train cars look like a string of colored beads disappearing into the tunnel running under Point Defiance. Neither had I seen the underside of the bridge. 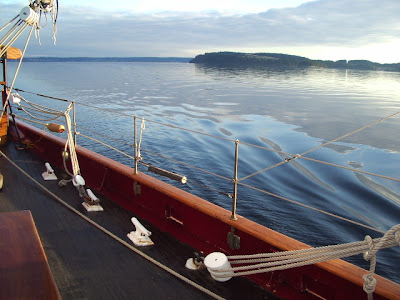 Every time I'm at Titlow Beach I gaze off to the southwest and wish I could travel by water to the places on Puget Sound unknown to me. Sunday I did. Along the way I discovered the joy of seeing youth filled with promise, and enthusiasm, a good sign for our future. I gained more respect for the adults who give so much of themselves to help and teach others and thereby make the world a better place. I discovered the exquisite beauty of varnish on old wood in the golden glow of a setting sun, the different designs made by moving water, and the rare pleasure of true quiet. I also learned that being middle-aged or teen-aged doesn't really matter, as long as you keep learning and growing.

We approached Kopachuck State park at twilight. It seemed the only likely spot where Elizabeth and I could rendezvous with my husband Dave for a ride back. After heartfelt goodbyes to our new friends we once again settled into the inflatable and headed for shore. Dave timed it all perfectly, found a trail to the beach and appeared out of the woods just as our feet crunched gravel. I turned to look back at Adventuress, but we'd rounded the point and left her behind. It didn't matter too much. The pictures in my mind will keep as well as any in an album and I'll always be thankful for the gift of such a day. 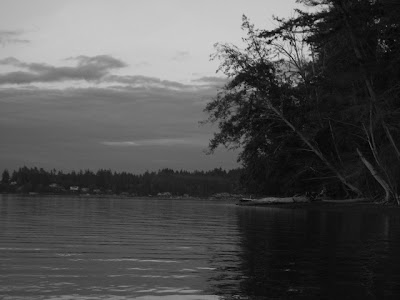