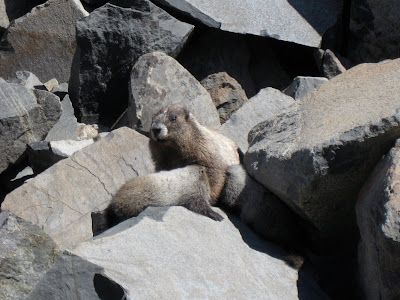 While hiking on a rocky slope at Mount Rainier, a friend of mine enjoyed the kind of luck outdoor photographers dream of. She happened to come across the rare sight of a mother marmot nursing her baby. Since some people have never even seen a marmot, I decided to do a some research and provide more information, including videos.

Apparently, the world's animal population includes about 14 species of marmots, and those native to the alpine regions of the Pacific Northwest are often seen by hikers. Here's an article from the Washington Trails Association about backpacking trips to see marmots. Hoary marmots can be found around Mount Rainier and Olympic marmots(marmota olympus) on the Olympic Peninsula. Many dig burrows in rocky places, and I suspect our mommy here isn't far from her own front door. They are known for making a chirping or whistling sound as they socialize with their fellow marmots. That's why the owners of a popular restaurant on Chinook Pass named their business Whistlin' Jack Lodge. 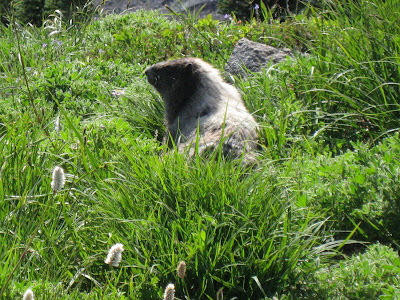 If you enjoy photos of Mount Rainier, here's a site called Mount Rainier Photos, that also contains a lot of valuable information of interest to hikers in the Pacific Northwest. The photographer behind this site is Sally Johnson and in "Sally's Blog" I found a post about marmots.

Who would think I'd also find a blog called Furry Marmots, dedicated entirely to these captivating little guys? Just for your entertainment, I'm listing some links to marmot videos as well. Remember this: you never know what you'll learn by reading Good Life Northwest. Please keep coming back.