Behind every news story, the personal stories full of human emotion and memories wait to be discovered, and I heard and sensed some of those this week. The response to my previous blog post about the fate of the historic Washington State ferry M/V Rhododendron, still coming to me in the form of e-mails, phone calls, and in person, made me decide to share more of my photos of this beloved boat. But as a bonus, I also want to share some vintage postcard images sent to me by  Steve Pickens, the man behind the website Evergreen Fleet, mentioned in my original post, and author of "Ferries of Puget Sound." He is helping to  preserve our local maritime history, an effort for which we should all be grateful.

Pickens, a native of western Washington, was born in Seattle and grew up on the Kitsap peninsula. "Ferries have always been a part of my life," he told me in an e-mail. "I got interested in ferries through the Kalakala, first getting into her history and then branching out from there."

He became involved, conducting tours on Kalakala and serving as a volunteer archivist, for a time. "I had really been previously interested in the old Atlantic liners, but the interest turned a little more local after the Kalakala came home," he said.

I asked Pickens how long his site, Evergreen Fleet, has existed and how he came across all his fascinating material.

"The website has been around over a decade now. A lot of my research came from books on the subject to a certain point. The final 'what happened to' a lot of the old retirees involved sending FOIA requests to the Coast Guard or emailing the last known company/owner of said vessel."

"People have been incredibly generous sharing their personal memories and photos in many cases.," Pickens said. "There's a certain fondness for the old boats--particularly the old wooden ferries. I'd have to say the San Mateo and Vashon are, hands down, the most fondly remembered."

And now for a few taken from the Tacoma side.

The following four photos were taken at Point Defiance on a cool, misty morning in the otherwise hot July of 2008. Please see the blog post they relate to: Breath of Life: Marine Air in the Morning. 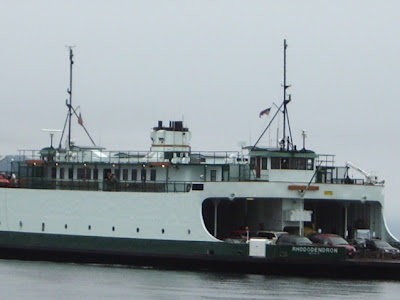 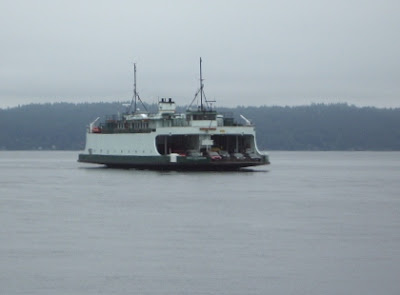 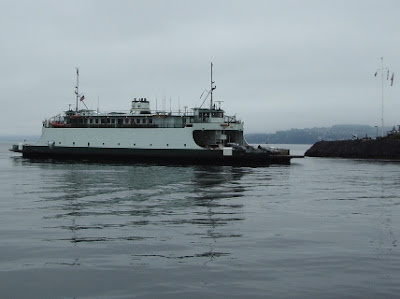 
I've never met Steve Pickens but I can tell that, like so many of us, he loves our rich maritime history and out maritime environment too. Please be sure to look at Evergreen Fleet. You'll be glad you did.

Thank you for joining me on this little two-part tribute to the Washington State Ferry Rhododendron. And many thanks to Steve Pickens for sharing the postcard images of life on Puget Sound.

All text and photos in this post, with the exception of those provided by Steve Pickens, are copyrighted by Candace Brown and cannot be used without permission. See  Evergreen Fleet concerning the postcard images.

Hello Candace,
Thank you for your photos and thoughts! Now that we have the Chetzemoka, we can make friends with her and start new memories. There are many kids and grandkids who will have memories of riding her and other modern ferries. Great adventures to look forward to for us all!
Best wishes to you and all happy ferry riders!

Hello,
while looking for information about the MV Rhododendron I came across your blog post about the last run of this great little ferry.

My husband and I were married on the Rhododendron in 1998. It is "our" ferry. I guess I missed the news about the retirement or maybe I refused to listen. That sweet little ship has so many wonderful memories attached to it, I will always be fond of it.

Last year on our anniversary, 11/21, we took a chilly walk on ride on our ferry. My husband always likes to tell people we got married on the boat, usually a crew member. This time we were invited by the captain to join him in the bridge while he brought the boat to dock at Point Defiance. We were blessed with a crisp, clear night and had a wonderful view of the water and Tacoma's shining lights.

Thank you for sharing this special little ferry boat with your blog readers. I am so glad I found your posts.
Judy Kelley

Thank you both for reading my blog and sharing your thoughts. The wedding story is so special. I guess this proves that we can never take for granted the people and things we hold dear, because they can suddenly be gone.

I'm getting used to the new ferry, but I still miss the old Rhody.

Thanks for writing,
Candace

Hey, I'm a deckhand with WSF, I loved reading this! I love people's personal connections to the boats and the stories. Great photos too. Chetzemoka is not the same, but it's much safer, and in time, she will have her share of stories, marriages, meetings, etc. Bless old Rhody.

Thank you for reading my post, sharing your insights, and reminding us all that even though things change, a ferry ride is still a ferry ride. I will think of that next time I go to Vashon and see little kids or out-of-state visitors so thrilled to have the experience. Thanks also for doing your important job, in all kinds of weather, and for loving ferry boats as much as I do.