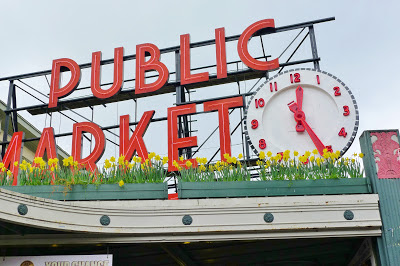 When I go to the Pike Place Market in Seattle, I sense the presence of ghosts. I feel the spirits of two happy little boys dressed in the style of the early 1920s who giggle, hide, and chase each other among the farmers' stalls. I like to believe these ghost exist, because if they do, one of them is my father. 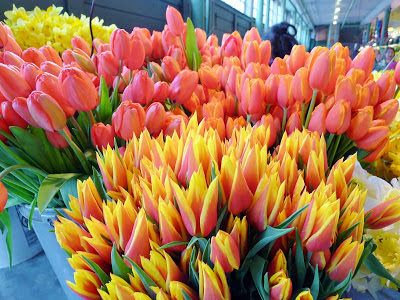 Oh, I know. That sounds unbelievable. Obviously, he didn't die in childhood. He grew to be a man, married my mother, and they had seven children of their own over a span of twenty years. I'm the sixth. But he did play at the market as a young boy during a period of time between 1918 and 1921. (To learn more about the history of Pike Place Market click here.) 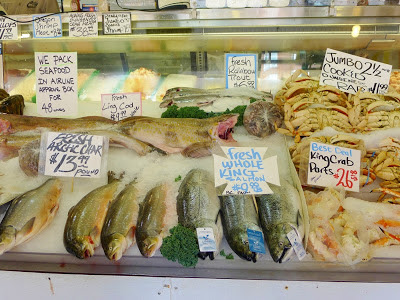 
﻿During two or three of those years, my father lived with his grandmother on 40 acres near the town of Poulsbo, on the west side of Puget Sound, surrounded by Scandinavian immigrants. Early every Saturday morning, his best friend's mother would catch one of the old wooden Mosquito Fleet steamers, bound for Seattle, where she would sell her chickens at the Pike Place Market. She always brought along her own young son and his pal (my future father) to help her. 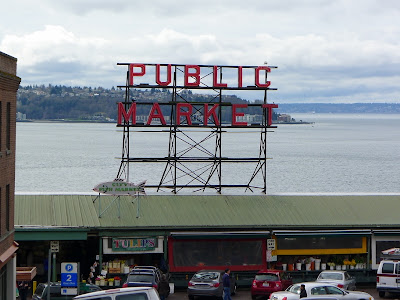 Together, they carried the chickens up the many steps from the dock and then set up shop. However, after that chore was done, the boys had the run of the market all day long. It was one of Dad's best memories. 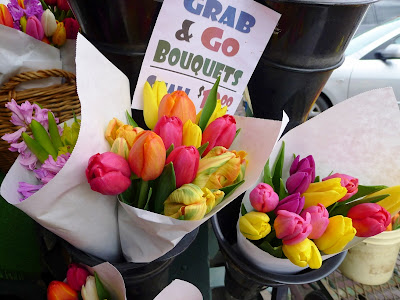 My father died a few years ago at the age of 96. Those carefree hours of youth all far behind him, he approached his final days with pain and suffering. It hurts to think of that sad time. When I wander through the market now, as I did last week, I remember what he told me. I love to believe his spirit, as a boy, plays there once again, peeking out from behind buckets of tulips or displays of produce. 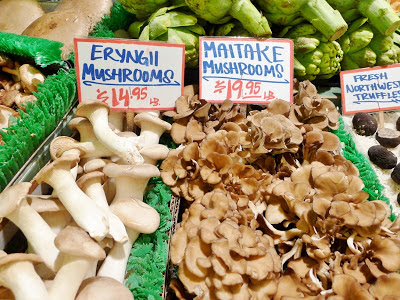 I imagine that I might catch a glimpse of him smiling and waving at me from around a corner just before disappearing from sight. I picture his dark curls and kind eyes, how he must have delighted in all the colors, sounds, smells, and people. He would have been curious about items offered for sale that he'd never seen before, just as I am now. 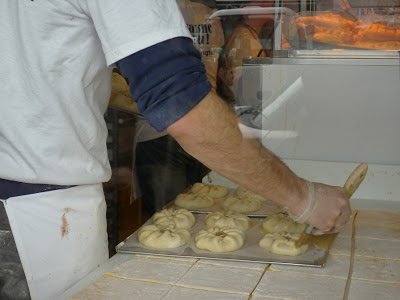 
These days, no one would allow children to scamper out of their sight at the market, and it's much too crowded for anyone to dash about like I suspect the boys did. And even in their play, I'm sure they were never destructive or naughty,having a strict upbringing. I know how important it was to him that we were taught to behave and respect the property of others. 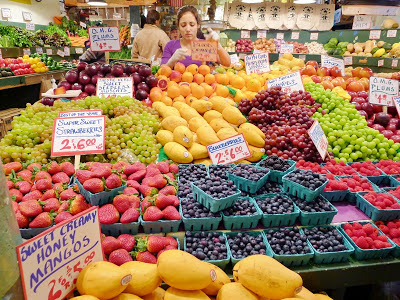 ﻿
But he would have known a kind of freedom and joy few children experience any more, the kind we enjoyed, at least to the extend that common sense would allow. He and our mother gave us the gift of unstructured time and the idea of using our own imaginations to fill it. 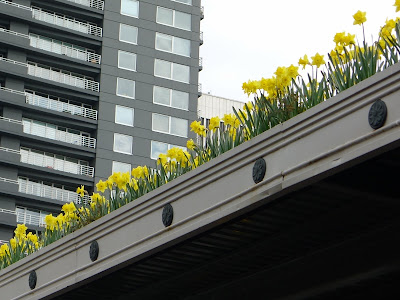 ﻿
On the day I went to the Pike Place Market, the sun came out and the air warmed. With all the flowers for sale, plus daffodils blooming on the roof edges, it felt like spring. Even in a place well beyond a century old, I saw the renewal of life and the comforting cycle of the seasons all around me. 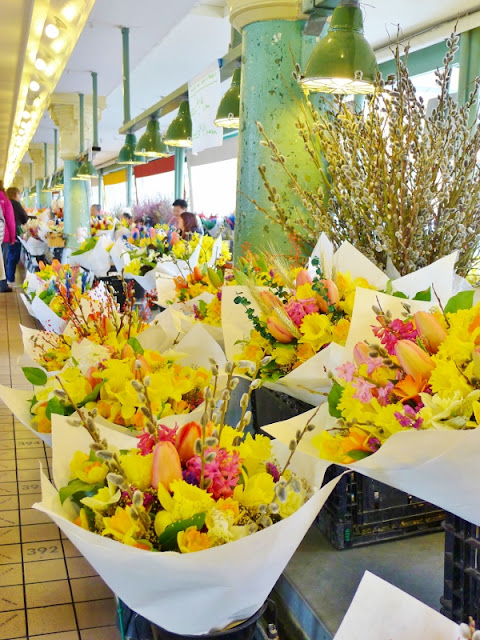 ﻿
So, in memory of Dad, his boyhood friend, the young mother with her chickens, the steamers on Puget Sound, and all the ghosts of all the people who have wandered the market for generations, I dedicate this post.
And I offer these photos of a few of the sights to be seen there right now. This is a lovely time of year to visit Pike Place Market. And if you happen to glimpse a vision of a handsome little fellow wearing knickers and a newsboy cap, please tell him I said to rest in peace, but only after he has had his fill of fun. 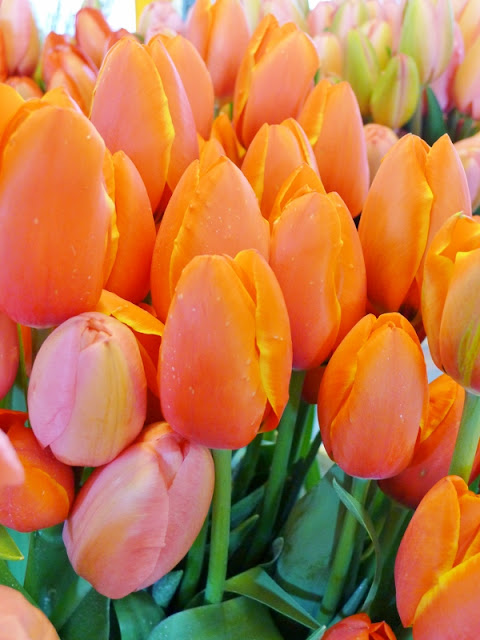 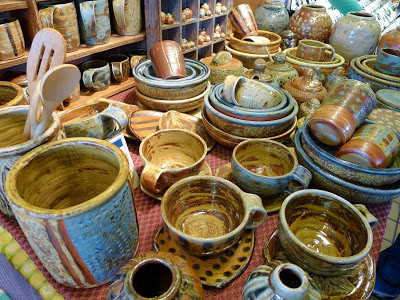 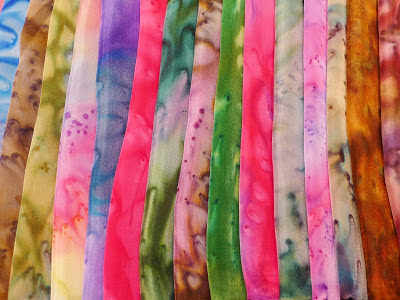 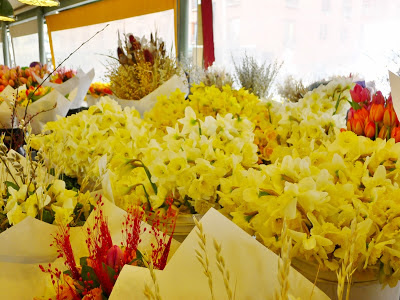 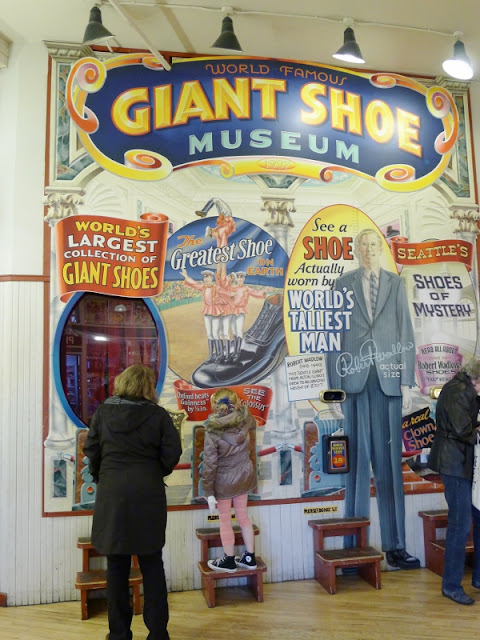 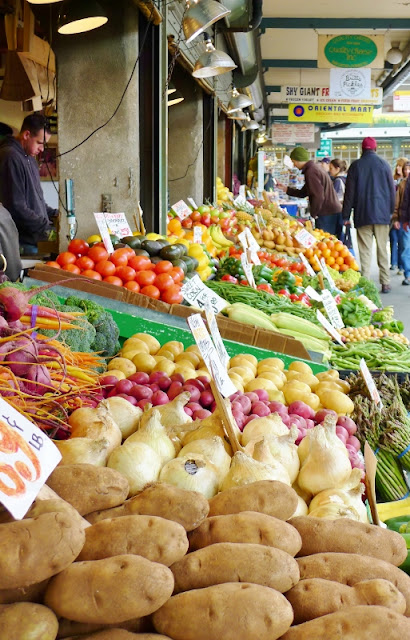 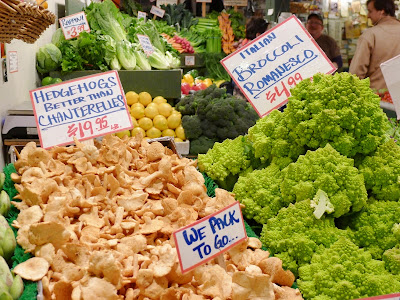 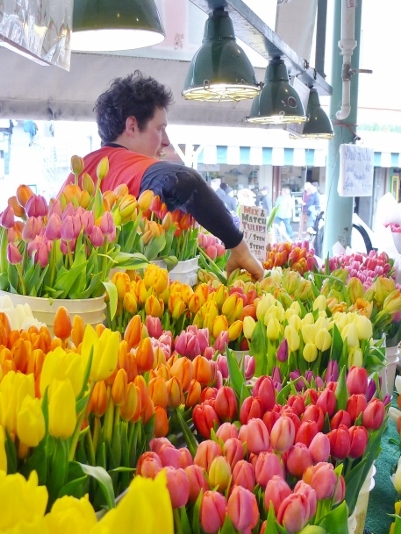 Gorgeous photos! I used to skip out of school as a teen and with drawing supplies in hand, I would hop the bus from Bellevue to the Pike Street Market. There is a restaurant with 2nd floor seating that would allow me to hide up high and draw the action below. Such memories!

Great story! My mother's mother took her to the Market when it was young. She was born in 1906. When I was little, my mother took me too. Lunch was always at Manning's, carrying our food up to the 3rd floor where we could watch the harbor. When my kids were littls, we did the same, except Manning's became some other name.
Later, the grandkids got the same tour. A magical place.

Very nice memory of your dad! He would have had a great time, I can see him there too. May he rest in peace, as I know he is :-)

What a creative way to frame your memoir. I'll print it out for my class to enjoy.

Thanks, Marcia. I'd love to see those drawings. I hope you still have them.

Thanks for sharing your own family stories, Rex. I'm glad you enjoyed the post.

Yes, he certainly would have. I was always grateful for the way he prioritized having fun. We went on so many great family vacations and day trips.

Thank you. What a nice compliment you have given me.

Thanks for the marvelous glimpse of Spring in Seattle filled with colorful tulips and shelves filled with freshly grown delights. A welcomed side here in the north woods where we still have piles of snow as high as the garage and about two feet of snow covering every surface that made itself available all winter.

Pike Place Market was an easy jaunt from NE Seattle by way of the bus when I was a girl and our Rainbow Assembly had frequent rummage sales in a big room downstairs now filled with lovely NW Coastal Indian art. I loved coming home with a big newspaper-wrapped crab under one arm and a grocery bag filled with fresh produce in the other for a Saturday afternoon lunch. YUM and thanks "cous"!

Just to let you know, I have posted your blog link to our Facebook page. If anyone would like to visit the page, it can be found at:
https://www.facebook.com/CBBainCapitolHill

Congrats on a lovely story.... Rita

Hi there, I own the Market Ghost Tour and we actually have photos of a young boy in a news cap in the Market - you won't believe when you see it. It's hard to imagine that it could actually be what it appears to be. The photo was taken about three years ago. People often see young boys like you are describing in the Market. This was wonderful to read. You can reach me at misagapi@gmail.com and I can send you the photo - Mercedes www.seattleghost.com