The music’s beat feels irresistible and contagious. Wearing everything from elegant vintage clothing to jeans, couples enliven the dance floor with restless enthusiasm as they pick up the pulse and easily translate it into the Lindy Hop’s acrobatic steps, spins, leaps and slides, all of which seem impossible to onlookers. Even those on the sidelines get caught up in the rhythm, wanting to move, wanting to be part of this living, surging entity of energy. The scene is Camp Jitterbug, Seattle’s annual Memorial Day Weekend gathering of swing dancers.


This year’s event takes place May 24–27 in various dance venues in a three-block radius on Capitol Hill. Attendees can take classes taught by 25 of the world’s best instructors, offered as six different skill level tracks. This spectacular weekend begins at 7 p.m on Friday with a performance extravaganza called The JumpSession Show, held at Benaroya Hall, followed by dances and workshops non-stop Saturday through Monday. (See a complete schedule here.) 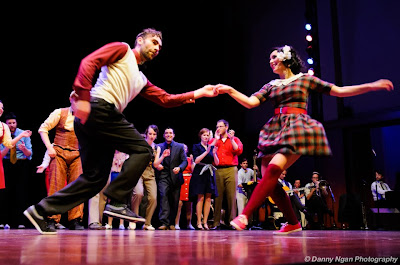 ﻿
If you’re interested in attending, but you think Memorial Day weekend sounds a long way off, be aware that classes fill up quickly. Many of the registration package options are already SOLD OUT. I recently interviewed Tonya Morris, the producer of Camp Jitterbug and the Jump SessionShow, and I am delighted to share her insights and tempting details here:

GLN: Please give me some background on Camp Jitterbug.

Morris: This is actually Camp Jitterbug’s fourteenth year. I fly in between 20 and 30 of the top dancers from around the world, as well as some of the top musicians in swing and jazz. There’s nothing quite like it, so it’s a really valuable asset to the community, an outlet for us (meaning those in the Lindy Hop dance community) to be able to educate and show the general public what this dance is, how important it is as a part of American history, and how fun it is in general. And it’s to try to keep this dance from the late ‘20s and 30s and into the ‘40s alive and kicking, now, in 2013. This has become a passion. 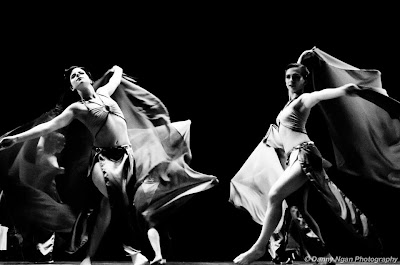 GLN: Can you tell me more about the show?
Morris: Because we have all of this talent here all in one weekend, eight years ago I decided to start doing a show. Why not utilize this talent and give them a stage to show off and perform and show off their talent, besides just coming here to teach? So it started out in a little room in the Knights of Columbus Hall on Capitol Hill with a hundred folding chairs. It’s grown into an event where 1,000 - 1,500 people that show up at the large hall at Benaroya where the Seattle Symphony plays. It’s become a full theatrical production with hired directors and script writers.


And from what I know in the Lindy Hop community, it’s the largest and most professionally done show that features Lindy Hop, in the world. We have a mix of about maybe half dancers, half general public that comes to this. The main thing that the general public can definitely go to is the Jump Session show, because this is something where you’re sitting and watching. 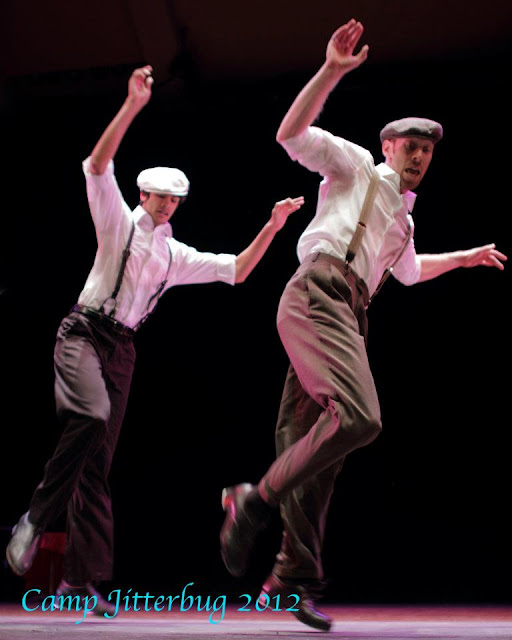 GLN: What I remember s the whole auditorium gasping at the moves those dancers made.

Morris: Yeah! It’s really neat when you hear the responses, especially from the general public, when they don’t know what to expect. For a lot of these people, they’re seeing Lindy Hop for the very first time and they’re just shocked. You don’t see that out in the general public as much. On Dancing with the Stars, you’re seeing ballroom dancing and it’s so different than the dances that we’re displaying here. We’re going to the authentic form of swing dancing, rather than a later ballroom version of it, which is extremely different than the authentic version.

GLN: So what happens after the Jump Session show kickoff?

Morris: After the show, we have an After Party where we utilize the entire stage inside the auditorium at Benaroya, where we have the band playing. Anybody who wants to go up and dance on the stage to the live music can dance there. And then we have DJ music out in the foyer, with a big dance floor in the foyer. So we’re taking over all of Benaroya for a part that goes until 1:00 or 2:00 in the morning. Included in the After Party, is a drop-in beginner lesson to teach you a few steps to get started on the dance floor that night. Then after that is when Camp Jitterbug starts— the workshop, dancing, and competition portion of the event, the core part of the event that has been going on for 14 years. 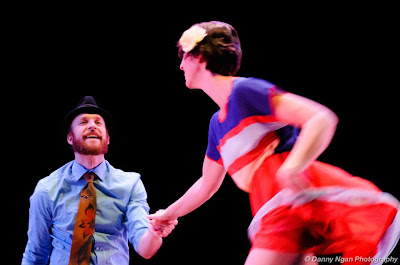 GLN: And other dances, in addition to opening night, and the competitions?
Morris: The workshops happen on Saturday, Sunday and Monday all day. And then we have competitions that happen in the evenings. The prelims happen ahead of time and then in the evening dances we have these really spectacular finals that happen where the people that made the finals are competing to the live band that’s playing. It’s pretty amazing to watch and the crowd really gets into it. Then we have the live bands playing.

Those are all happening at Temple de Hirsch. The evening dance will end at midnight and then everybody heads over to after-hours dancing and they dance from 1:00 to 5:00 in the morning, and they dance to live music at this time too. After they’re done dancing at 5 a.m. people come back and they’re ready to take their classes at 11 a.m. It’s pretty crazy.

GLN: Let’s hear a little about the workshops and instructors.

Morris: We have different instructors and performers who come in from all over. We have multiple couples from France. We get couples from Sweden. We have Chester Whitmore. He’s an incredible tapper and Lindy Hopper who studied directly under Fayard Nicholas from the Nicholas Brothers. He worked on the Carol Burnett Show. He choreographed for Madonna. He’s done everything.

And then someone that we’ve tried to get for years is Ryan Francois out of London. He’s going to be featured this year. He worked on the Spike Lee movie, as a choreography and performer in “Malcom X.” He was one of the dancing elves in Polar Express (that they based animation off of). He was the choreography for the dance scene for the movie “Swing Kids,” and he just has a wealth of talent. He’ll be in the show as well. He’s been on all the shows, like “So You Think You Can Dance” and “Dancing with the Stars” and all these things, as a guest performer in Lindy Hop.


We have dancers that we bring in from all over. We even have a dancer we’re flying in from Lithuania to teach. The scope of this is pretty massive.
Masters fly in to learn from these teachers, so it’s not just one level. We have six different levels, but seven different ballrooms that are rented out in a three to five block radius on Capitol Hill. And each of those ballrooms holds a different level of dancer. (see venues here) 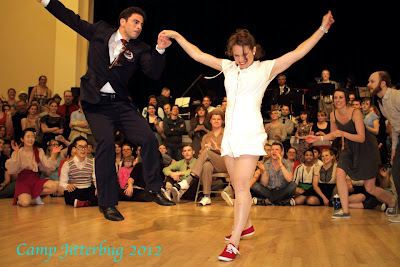 GLN: What is available for beginners? And beyond?

Morris: We have a really great beginner track option. People who have never danced a step in their life are coming here to just learn as much as they can in one weekend. And they come out and they’re able to social dance. It is pretty awesome to learn from the best in the world, your first time learning.


With the beginner track, we also do a coaching system. We have a couple from Seattle and they’re fabulous, dancers that are known internationally as well: Daniel Newsome and Gabby Cook. They stay with the beginners throughout the whole process. You have all these well-known teachers who come in to teach, but then they (Newsome and Cook) coach them along the way. So if anybody’s having any problems or issues, Dan and Gabby are there to help them out. The coaching program we have in the beginner track is fabulous and it’s gotten rave reviews from the people who’ve attended it. So that’s a part of the camp where you don’t have to know anything to do it.


Then it goes Intermediate, Intermediate Plus, Advanced, Advanced Plus, all the way up to Masters. People are auditioning to get into those tracks. 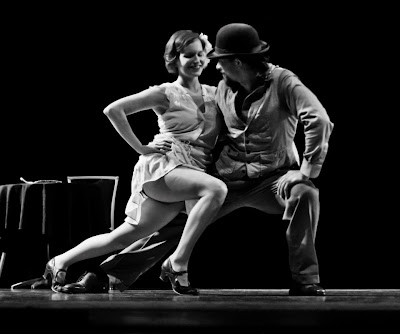 GLN: What about the other musicians in addition to Meschiya Lake and her Little Bighorns?
Morris: The music is a huge part of the dancing too because it really drives the dancers. The music is a very important element of it. That’s why I bring in really fabulous musicians. And the musicians usually change every year. Last year we had Jonathan Stout and this year Casey MacGill will be leading with his orchestra on one of the dances. He’s amazing.


Bands playing throughout the weekend:


Evan Arntzen (British Columbia, Canada) will be a special guest playing in several of the bands during the weekend) 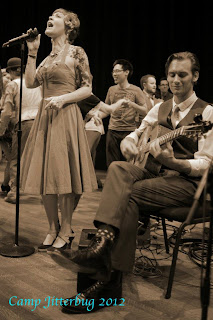 GLN: So would you say this is your biggest event ever?


Morris: I’ve actually had to cap the event. We get about 500 attendees that do the workshops and we’ve had that consistently for years now. (Counting people who just pay to take a single class or attend a dance, but have not registered for the entire weekend, the number grows to near 700.) We just don’t have the capacity to hold more, so we cap it off every year. As far as the show goes, it is always between 1,000 and 1,500 who come, depending on the year. We just don’t know until the show happens.


GLN: So, dear readers, my advice is to REGISTER  HERE AND NOW, so you won’t miss a minute of the fun.

(All photos and video courtest of Tonya Morris.)

"I remember the first time I attended the very first Camp Jitterbug. (Which was actually much smaller and called Jitterbug Weekend.) I was a fairly new dancer and had only danced in my home town of Vancouver before. I remember watching the instructors, (Tip and Holly, Minn and Corrina) dance and saying to myself, 'Is this the same thing that I'm doing?!!'

It was a real eye opener and I'll never forget how it inspired me to keep working on my dancing." 13 years later, Camp Jitterbug is still inspiring dancers to keep pushing and improving their fine dancing selves." ~ Joel Schwarz

"Year after year, the Jump Session show takes to the stage at Benaroya. It is chalk-full of some of the best dance talent in the world. It is a must see! I highly recommend it." ~  Tim J Hickey