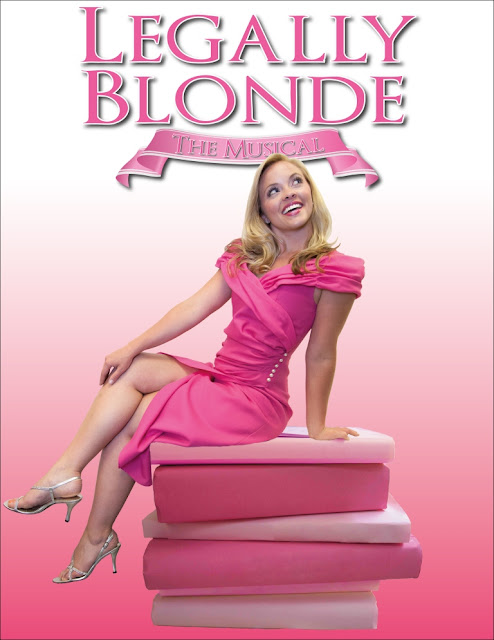 One of the funniest moments in “Legally Blond—The Musical™” at Tacoma Musical Playhouse is when actor Joey Schultz—in the role of the sexy, swaggering, shorts-wearing UPS man—says, “I’ve got a package.” Well, so does TMP. Great singing, acting, choreography, sets, costumes, and music add up to a package this theater wants to deliver to its audiences in the best possible way. They work so hard to do so in this delightful musical, running through the last weekend in April, and do deliver a great evening of well-crafted entertainment, including plenty of humor and some touching moments. But on the night I attended, some technical problems frustrated that delivery.
Before the performance began, Co-Founder and Managing Artistic Director Jon Douglas Rake welcomed the audience and called attention to a brochure in the program that described Phase II of their stage and auditorium remodel project. He emphasized the need for the community’s help with funding. Then, unintentionally, the musical itself became the most convincing sales pitch ever, demonstrating how much this theater deserves and needs our support. (Here is more information about the capital campaign and theater renovation.)


“Legally Blond—The Musical™” is a hilarious comedy with a serious point to make; don't jump to conclusions about the intelligence, depth, and potential of other human beings. Unfortunately, an outdated sound system detracted a bit from an otherwise dazzling performance. And I mean dazzling. It was so dazzling, in fact, that I strongly encourage you to get tickets now while you still can. The show ends on April 28.
Leah Wickstrom, in the lead female role of Elle Woods, sparkled as brightly as the rhinestones on her hot pink California-style handbag and left me profoundly impressed with her talent and pizazz. Rarely have I seen someone do everything asked of them—all that singing, acting, and dancing—with such apparent ease and such an infectious sense of fun. But she was not alone. This cast overflowed with talent.


The lovely Alena Menefee, who plays Elle’s rival, Vivienne, might not have been such a fire cracker as Wickstrom—that wasn’t her role—but she played her part with perfection. She knew just how to bring an interesting character to life, and ultimately into the affections of the audience, as we watched that character's integrity come through at the end.
I especially liked Bruce Haasl’s portrayal of the character Emmett opposite Wickstrom’s Elle. I hope to see more of him. These two sang in Act II that I will remember as a highlight of the show. Another was a scene with the ensemble where they incorporated jump ropes into the choreography, amazing synchronization. In fact, the choreography and the way this talented bunch executed it, and the great costumes, made this a visual delight.

Lisa Wright-Thiroux played a fun and endearing hairdresser Paulette. Mark Rake-Marona made a perfect Professor Callahan in the Harvard Law School scenes. And Steve Barnett, as the self-serving boyfriend Warner, made his character the perfect jerk we’ve all known at some time. Brittany Henderson, as the feminist Enid, added great humor and some political punch. Everyone, honestly, everyone, including the entire ensemble, did a fabulous job. I want to praise them all.


In spite of sometimes fuzzy sound, inadequate volume in the beginning (later corrected) and the occasional crackling of a microphone, the show did go on in grand style. But these hardworking, super-talented, perfectly rehearsed cast members and musicians deserve better conditions, such as:


·         a better location for the orchestra, improved lighting, and


·         a hallway to allow actors to move from the cast green room to the opposite side of the stage without going through the basement or outside!


These changes are all part of the remodel plan. Everyone who has worked for years to build up TMP or loyally attended shows deserves this too. It takes money, but if a lot of people give even a little, that money adds up.


I interviewed Rake recently, and he told me he is excited about how the remodel will give TMP the capability of improving all aspects of their productions and thereby create even better theater than they already do. “I think we do a damn good job now,” he said, “but I don’t feel we have reached our top potential. We really want to be regionally known as the best musical theater company. I think this will allow us a lot more flexibility to present shows and present shows better.”


Forget that UPS guy with the great body. It will take community support to help TMP deliver this package. World class musical theater in Tacoma sounds pretty sexy to me.
photo courtesy of Tacoma Musical Playhouse