HOT AND CREEPY — SPIDER LIVES INSIDE STEAM IRON FOR A WEEK 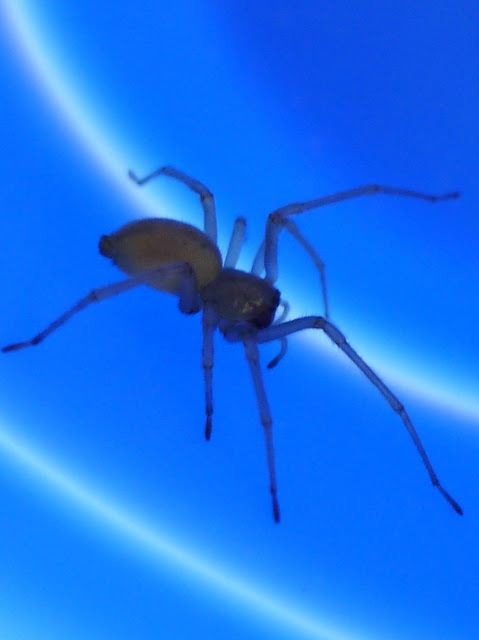 As shocking as it may seem to those of you who consider an iron as necessary to modern life as a butter churn, a few of us still use one regularly. I iron more than anyone I know, either pressing laundry or working on a sewing project. That’s why I noticed something wrong with my reliable little household friend.

We all lose steam as we get older, but in iron years (the small appliance equivalent of dog years) this one was still a healthy, young “hotty." Then, a week or so ago, its heavy-breathing, wrinkle-busting cloud of hot vapor began to decrease day by day until it ended up more like a butterfly sigh than a train whistle. I tried cleaning it. I checked the vents. I cranked up the heat and used the “blast of steam” feature, which caused a little bit to come out while in the upright position but none when I actually ironed. Nothing helped. Then for the first time, when I tried to fill the water reservoir the water just spilled down over the edge.

﻿
﻿
﻿
“That’s enough!” I exclaimed out loud, completely annoyed. “What is going on inside this thing?” Plenty, it seems.
I looked into the hole and noticed a white membrane-like thing completely blocking the tube about a quarter of an inch from the opening. I couldn’t imagine what it might be. I took a toothpick and ran it around the edge. Then I pulled. After a slight resistance, out came a glob of sticky white material that seemed to shrink into a ball, quickly followed by a very much alive and very agitated spider. Apparently it liked life in a sauna, and no one takes eviction well.
Some people kill spiders on the spot, but I didn’t. With amazing speed and dexterity, I grabbed a small drinking glass to trap the little intruder as it scampered toward the edge of the ironing board to disappear somewhere into my house and my imagination. I wanted to look closely to identify it, since I had never seen this type before. Have you? It was probably about the size of a nickel but wouldn't hold still to be measured or photographed clearly.
I compared this spider with photos of Pacific Northwest spiders on the internet but still haven’t found a sure match. Considering where it decided to live, maybe it’s a native of the tropics.
Now you have a new excuse for leaving your iron on a shelf in the closet. Just don’t let it gather spider webs!
Posted by Candace Brown at 11:42 PM

OK that is really weird Candy. So how's your iron working after the removal of the spider eggs? Did you release this thing into your yard? It could be the beginning of an invasion!

The iron worked perfectly as soon as the spider left and the wad of web material and eggs were cleared, although I wondered if I got all of it. I destroyed the eggs. The spider died in captivity quite soon after the capture, while I tried to figure out what kind it was. I feel rather bad about that. I just wish this spider had made a better choice in the beginning, but maybe it really needed to lay those eggs and this looked like a good place. Wrong!