ACTOR EVAN WOLTZ SHARES THE THRILL OF "JASPER IN DEADLAND," A NEW POP/ROCK MUSICAL AT THE 5TH AVENUE THEATRE 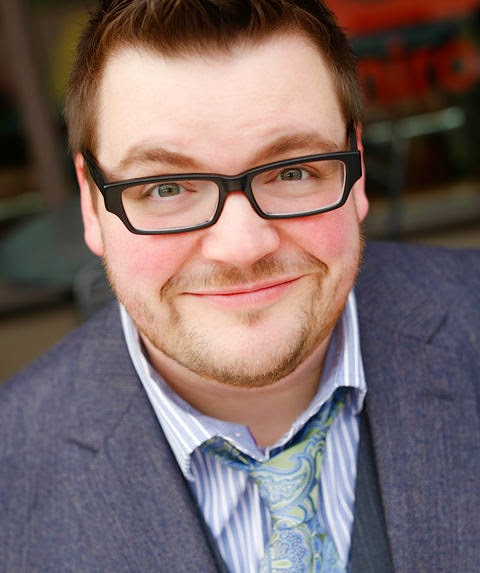 I recently had the fun of interviewing Evan Woltz, an actor in Jasper in Deadland, the new pop/rock musical written by Ryan Scott Oliver. The show is creating a sensation at The 5th Avenue Theatre in Seattle, where it plays through May 24, 2015. The story’s teenaged protagonist, Jasper (Matt Doyle), must travel through the underworld in search of his beloved friend, and as the theater’s press release says, he meets “both gods and monsters” during this intense and exciting journey. For Woltz, being part of this production is also an exciting journey.

Woltz plays the part of Pluto, ruler of the underworld, as well as other roles. He is thrilled to make debut at The 5th Avenue with this show, as was evident when we spoke prior to its opening. He already has impressive theater credits, including the New York premier of Thankskilling the Musical with the NY Festival of the Offensive, a regional production of Peter Pan with Arizona Broadway Theatre, and numerous Seattle productions, including The Yellow Wood, and A New Brain with Contemporary Classics; Jerry Springer: the Opera, Spring Awakening, and Full Monty with Balagan Theatre; and Bat Boy the Musical, and Gutenberg! The Musical! with Artswest.

Candace Brown for Good Life Northwest: What was it about this musical that attracted you and made you want to audition?

Evan Woltz: What drew me to it, and made me stop and take notice, was who was involved and what the show was. Brandon Ivie, the director, is from the Seattle area, and is very good about getting new works done in Seattle. He works in theatre in both Seattle and New York, and has built a reputation in Seattle for bringing new works and new composers to light. I’ve worked with him on at least four shows now, and he’s always been a director I’ve really liked—very creative, and able to bring a lot of talent into the room and get everyone to do their best work.

The show itself is the other reason. Getting to help create a new show at the 5th on a stage this size, with an audience this size, is so exciting to me. I think that Seattle deserves new work more often, on all levels of stage. Having messages that speak to a younger audience and ultimately bring new people into the theatre, is all good.

Also, a lot of the artistic production team is from New York, and when we do things like this, I think it shows the East coast that the talent level is definitely here, that Seattle is comparable to the best cities in the country as a resource for theatre talent. Whether it comes to holding auditions or developing new works, Seattle should absolutely be one of the first cities that come to people’s minds.

Brown: What about the story itself, the mythology aspect? Was that part of the attraction?

Woltz: For me personally, I love seeing an old Greek myth reworked through modern storytelling. I didn’t know too much about the show when I came to audition. I knew it was character driven, not necessarily traditional roles, and with lot of very interesting characters. With the exception of the main three—the biggest villain, the hero, and the hero’s love interest—everybody else is playing at least three or four different characters throughout the show, with so many different approaches. That’s very much in the vein of what I enjoy, being able to play several weird and unique characters that people will remember. That’s appealing to me. And it’s a rock musical, and that also is very much in my wheelhouse.

Brown: You are playing Pluto, the king of the underworld, and who else?

Woltz: I’m playing a mad doctor in the underworld, actually a dead doctor named Dr. Esposito. He’s a character who sort of relays the plot. As Jasper wanders through Deadland, if he touches you, you remember flashes of your life, so Jasper becomes kind of a major celebrity in the underworld, connecting people to the lives they left behind. I also play other minor characters, a Russian bouncer and other denizens of Deadland.

Brown: Promotional material for this musical refers to it as “thrilling.” I want to know why you think it’s thrilling.

Woltz: The first thing that comes to mind is the set. It’s moving and it’s beautiful. It’s quite a bit different from anything that’s been on the 5th Avenue stage before in that it’s not that traditional sort of set where things fly in an out and backdrops are dropped in and off from the side, and pieces of furniture come on. It’s more like one gigantic art installation that is constantly morphing to fit the scene. It’s full of color, full of life. It moves and feels organic and alive, kind of like we’re trying to make Deadland be. Every element of it is totally thrilling. It’s very cool.

Brown: What other aspects do you believe would thrill people?

Woltz: I would definitely say the music is very thrilling. All of the characters work. As far as the way it’s being approached, it’s sort of dark, but exciting and electric. Ryan Scott Oliver, who wrote the music for the show, has a bit of a dark side in his writing and it’s neat to see something like that thrown up on the stage. And our fantastic choreographer Lorin Latarro is working relentlessly to give every moment in this show the exciting energy and movement this world deserves. Her eye for detail is amazing. Everything really sets the mood in the show.

For the actors, part of what’s thrilling is that the show is still changing, being written and rewritten, and made more focused. We’re still work shopping it right now and we will be for the first two weeks of performance, sort of crafting it as we go.  Things change every day, so it’s really exciting for us. We have a whole team of people working with the creators, Ryan and Hunter Foster, on the script side and the music side, giving us updated pages of script and score, sometimes twice a day.

Brown: What are you enjoying most about this experience of working at The 5th Avenue and with the people there?

Woltz: The group of people they have pulled in for this cast make it a pleasure. Brandon Ivie, the director, told us at the beginning of the production, that the reason he picked everybody he picked—beside the fact that everybody they chose had an awesome audition—is that we are all team players. That has proven to be the case. There are no egos in the room. Fourteen actors on stage and all of them, the folks from New York, the local folks, have been wonderful. They are incredibly talented and committed, with endless amounts of energy. There is a lot of care and respect in the room.

So the level of professionalism, the amount of exciting and interesting ideas from the design team – the ridiculously amazing and provocative costumes by our costume designer Pete Rush and his team – have been top level, like nothing I’ve ever seen before. And you can tell how excited all the production team is. I talked about the set, created by our designer Jason Sherwood, and they are very excited about the set. And Robert Aguilar is one of the best lighting designers here in Seattle. When they presented the entire idea for what was going to be on stage—you can’t just have the set designer on stage explaining everything—they were basically taking turns on their PowerPoint presentation, showing everybody every aspect at once, because the lighting, the sound, the set design and the costumes, everything kind of holds hands and works together. Once again, the level of connectedness is unlike anything I’ve ever seen before.

Brown: It sounds like it’s going to be a sure winner.

Woltz: This is a totally exciting show. Usually, I’m pretty cautious all the way through a production rehearsal, right up until the last minute when I see what the product is going to look like. I’m usually pretty nervous about inviting a bunch of people and telling them it’s going to be a good time, for sure. But this one, absolutely. All the way through, from the beginning until now, I’ve been nothing but excited about getting into this show and showing it to people. It’s been wonderful.

Brown: You’re making me excited to see it.

Woltz: I think new works could happen 150% more and it still wouldn’t be enough. The fact that it’s happening at the 5th Ave is fantastic. Seattle is very lucky. I think every time something like that goes well, it just drives more eyes toward Seattle, which is the most important thing.

Brown: We happened to do this interview on your 34th birthday, and I am thinking of all the exciting years ahead of you. I know you recently made a major decision about your own life’s journey.

Woltz: This is the one year anniversary of me quitting my day job to do art full time. It has been an awesome blessing.

Note: Jasper in Deadland is rated PG-13 because of adult themes and some instances of language and references unsuitable for children. Please read the content guidelines here.

Posted by Candace Brown at 9:28 AM